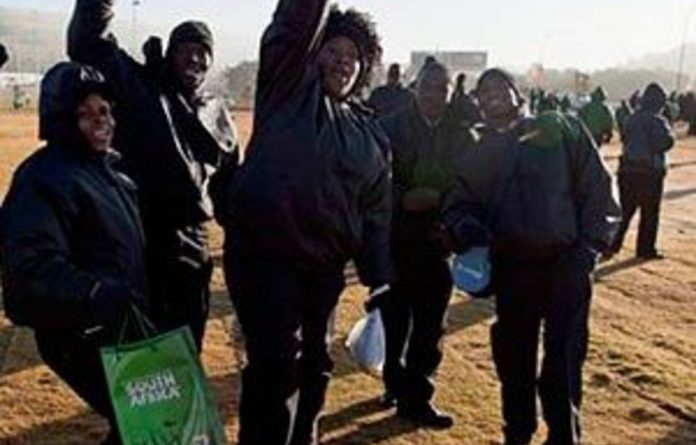 South African police on Tuesday deployed about 1 000 members to take over security duties at Ellis Park in Johannesburg after security guards went on strike.

Stallion Security guards downed tools at the stadium ahead of the Soccer World Cup match between Brazil and North Korea.

The police have now taken over the security at four World Cup stadiums after strike action began in Durban on Sunday.

“A meeting between the South African Police Service [SAPS] and the local organising committee has resulted in an interim arrangement of the SAPS taking over the security detail at four stadiums, in Durban, Port Elizabeth, Cape Town and Johannesburg, in the interest of ensuring safety of the World Cup tournament,” said Major General Nonkululeko Mbatha in a statement.

Sleeping in Park Station
About 700 stewards and security personnel contracted for the World Cup were striking outside Ellis Park about three hours before kick-off.

The workers standing outside the Fifa accreditation centre at the stadium said Stallion Security told them they were going to get paid R190 for the night and get their contracts terminated.

Michael Mosegathele said he was promised double the salary of an ordinary security guard as this was a special event.

“I even went to school to get special event training,” he said.

Some of them were sleeping in Park Station between games as they did not have money to get home.

The workers said they were contracted for 12 hour shifts from 6am to 6pm, but they often had to work up to 16 hours.

They were paid R135 for the previous game that they worked at.

“We have activated necessary and adequate contingency plans to different stadiums in the country.

Stallion Security management was not available to comment. — Sapa