Riddles of youth and progress 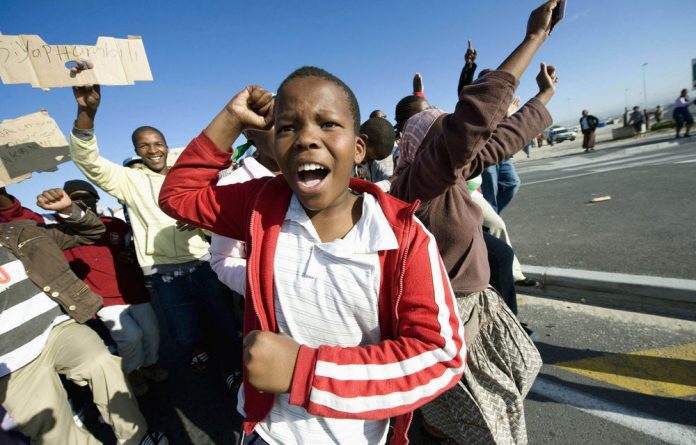 The condescension that we of greyer hair and emptier scalps tend to evince towards young people is as much artificial as it is pretentious.

It is an ageism that can be a convenient tool of social control; some rule that there are the deserving — to whom it is decreed by sheer dint of age that they should lead.

What we do not realise, though, is that this has its corollary; treat mature youths like children and they will behave as such. They will say anything and do anything, proceeding from the perspective that someone else will clean up after them.

These attitudes deprive the nation of that explosive blend of youth and ability that makes works of genius possible. With that in mind, I will pose a few riddles that young leaders must help unlock for all South Africans.

The second riddle pertains to the conduct of politics in the current age in our country, especially at local government level. How do we interpret the imperatives of intraparty and wider democracy, and their relationship to poverty? There is, on the one hand, an opportunity for genuine people-driven development but also, on the other hand, the reality that poverty can generate the kind of political conduct that destabilises communities and even development projects, as streetwise local politicians seek to displace one another in pursuit of personal advancement.

The third riddle pertains to finding a growth path that is premised on the improvement of people’s quality of life. Where are the young economists who, instead of debating their ideological likes and dislikes about macroeconomics, can unlock the interrelationships among the exchange rate of the currency, inflation, levels of investment, interest rates and savings, and the appropriate balances that we should pursue under different conditions, to move to a higher trajectory of growth?

Today youth unemployment stands at about double the rate of unemployment across society. Many young people have never known the pain, the joy and the responsibility of earning an income. Close on three-quarters of the unemployed are between the ages of 15 and 34. This, we all know, is at the root of many of our social maladies, including crime and the rate of HIV infection — and it is clearly unsustainable. What are the interventions required to deal with this social and economic challenge decisively and how do we navigate the self-interest of organised labour, which opposes proposals such as an employment subsidy?

The fourth riddle, related to the third, is about the pursuit of common purpose among South Africans. We all have a broad common idea about where we want our country to be, as elaborated in those lofty words in our Constitution. Leaders in all sectors, I presume, know that the national democratic society that we seek to create would redound to the benefit of all.

I also presume that they know that to attain those ideals will require hard work and sacrifice. Yet how do we deal with an approach to social dialogue in our country that is premised on each sector demanding its pound of flesh, without regard to the hard choices that have to be made in different phases of our development trajectory? How do we narrow the divide between the gilded mansions and the craggy shacks — in terms of income, access to health, education and other opportunities?

This brings us to the fifth South African riddle: The issue of race, and how racism is compounded by corruption both in the public and private sectors. Hindering the building of nonracialism is, for instance, the conduct of BEE front men and women. For in the mind of those dishing out BEE largesse is the thought: “If I can buy him or her, he or she is surely of a lower order as a human being.” Thus the community and the race to which such front people belong become the butt of jokes in bars, at dinner tables and on golf courses.

Inversely, this becomes a convenient excuse on the part of some in the white community to avoid dealing with the obligations of the 1994 settlement. The warped rationalisation that takes root is: “Let’s critique from the sidelines, let’s exaggerate the weaknesses, we can’t make common cause with ‘them’, we can’t sacrifice for the common good because ‘they’ are corrupt.”

This attitude, and the radical rhetoric used by some black leaders to mask greed and ostentation, feed into each other: White spiritual emigration and a pretentious African nationalism of convenient victimhood are two sides of the same coin.

The last riddle pertains to the confidence of South Africa to do good things, to better our condition and contribute to the endeavours of humanity simply because we can — not to solicit praise. Some call this the “catwalk syndrome”.

When we upgrade our infrastructure to meet our economic and social needs and when we prepare for what should be one of the most successful Fifa World Cup tournaments ever, it is not simply because we can do it in line with our commitments to the football family and to our own society. Rather, it is to show the world that South Africa is also capable of doing good things. What is it in our psyche that feeds this “also-ran” attitude to life and how do we liberate ourselves from it? For, when other nations sense that we crave their approval for everything we do, they will naturally exercise their right to extend such approval and to withhold it when it suits them rather than us.

These then are just a few of the issues that I believe should occupy the minds of young South Africans in the current environment. The answers to these and other questions should come from you. Otherwise, the successes that we celebrate today will be nothing more than an act of revelling in the extraordinariness of an ordinary existence. We will improve our individual condition of life. We will, amid poverty and inequality, surround ourselves with walls and barbed wire. But we will forever live exasperated lives of insecurity. For the wretched of the Earth will breach these defences as they demand their place under the South African sun.

And so, my message is a simple one. South Africa stands at the cusp of a decision. Whether we tip in the direction of faster progress depends to a large measure on whether we unlock the talent of the nation’s youth. To achieve this we need to harness that cocktail of youth and ability that makes works of genius possible.

Joel Netshitenzhe is executive director of the Mapungubwe Institute for Strategic Reflection, former head of the Policy Coordination Unit in the Presidency and chief executive of the Government Communication and Information Service. This is an edited version of his address to the M&G’s 200 Young South Africans gathering. The full version can be accessed at www.mistra.org.za.