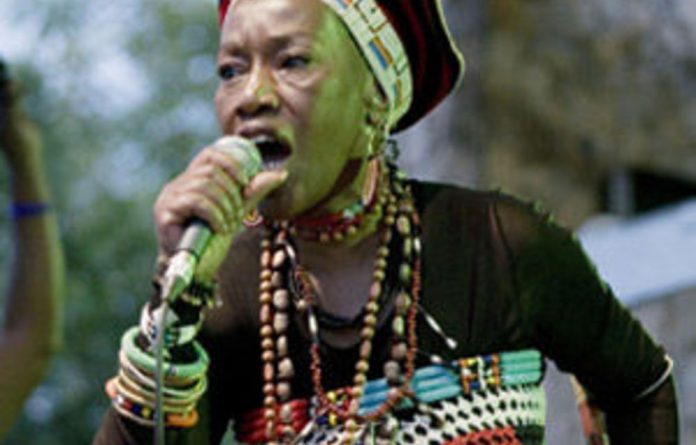 Tributes flowed in on Wednesday for singer Busi Mhlongo, who died from breast cancer on Tuesday evening.

KwaZulu-Natal arts and culture minister Weziwe Thusi said she had visited Mhlongo a few weeks ago and “hoped and prayed” she would pull through.

“I am really sad but she is in a better place now,” said Thusi.

“Mhlongo will be remembered for her historic contribution to music in South Africa and abroad. Her sharing the stage with international greats including Hugh Masekela, Dorothy Masuka, Salif
Keita, Manu Dibango and many others speaks to her own greatness,” he said in a statement.

She achieved the feat of being the first female Maskandi artist to be recorded and left a legacy South Africa could be proud of.

Thusi said that younger artists such as Thandiswa Mazwai, Simphiwe Dana and Camagwini credited Mhlongo for inspiring them to be true to themselves as artists and young women.

“May her soul rest in peace. My sincere condolences to her family, fans and friends,” said Thusi.

The Congress of South African Trade Unions said Mhlongo had made a unique contribution to the development of South African music and culture, and had paid tribute in her music to workers’ struggles.

“Her song Umentyisi condemned the violence inflicted on our people by their colonial masters. She fused traditional Zulu music with modern styles and promoted South African music to a worldwide audience,” read a Cosatu statement.

Mhlongo hailed from the Inanda informal settlement, north of Durban.

The South African Broadcasting Corporation said “the queen of modern Zulu music” first made a name for herself in the 1960s by winning a talent competition. After a few productions, including the African Jazz and Variety Show, her distinctive voice, music, presence and looks opened doors in Southern Africa, Europe and Canada. She sang to rave reviews with the first World-Music band, Osi-bisa, Max Lässer, Hugh Masekela, Madala Kunene and Steve Dyer.

Mhlongo was later initiated as a sangoma, which influenced her four albums — Babhemu, Urban Zulu, Freedom and Amakholwa. She was born into a musical family at the Inanda informal settlement in Durban in 1947. – Sapa