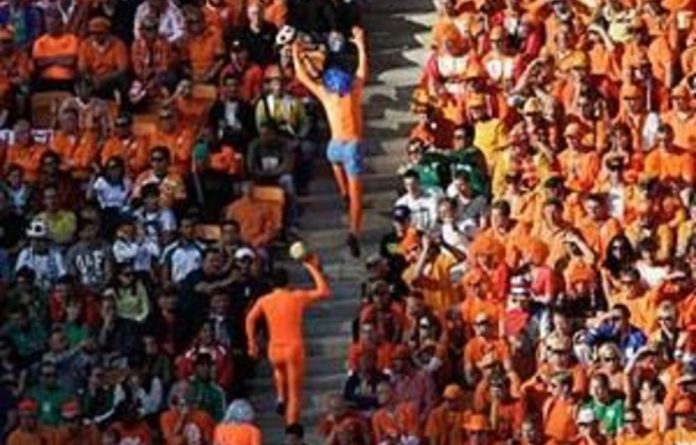 “In this case, it has surfaced that at least two coordinators were flown in from The Netherlands to organise this ambush activity — they hired innocent local girls and devised a strategy,” the Fifa media desk said in a statement.

This included training the group of local girls before the match.

Also, the two organisers’ strategy included “disguising them as Danish fans [covering their orange dresses] and using a decoy group to divert the attention of Fifa and safety and security authorities to another area while the big group entered the stadium through another side, and then compelling them to lie to the police about the organisers’ involvement in the activity”.

Two Dutch women, Barbara Castelein and Mirte Nieuwpoort, appeared in the Johannesburg Magistrate’s Court on Wednesday after a few dozen women, all dressed in the same orange miniskirts, were taken in for questioning by the police on Monday.

The orange miniskirts were handed out in Bavaria gift packs in Holland ahead of the World Cup.

On Wednesday, police could not say why only two women had been arrested.

The Dutch newspaper, De Volkskrant, reported online on Wednesday that it was believed the two women arrested had their flight tickets and accommodation in South Africa paid for by Bavaria, while the other South African women wearing the dresses only seemed to have been hired for the day.

“Fifa has filed charges against the organisers of the ambush marketing stunt pulled during the Netherlands vs Denmark match in Soccer City. No charges have been filed against the young South African women used in this illicit activity,” Fifa said.

Legal assistance
Meanwhile, Bavaria is providing legal and other assistance to the two Dutch women.

“Unfortunately Bavaria has been drawn into the furore surrounding the arrest of the two ladies who were wearing an orange dress also worn by thousands of Dutch ladies and football supporters,” the brewer said in a statement late on Wednesday.

“There is no way Fifa can hold these ladies responsible for their attendance at the match in their Dutch dress in Soccer City, and Bavaria is currently doing everything in its power to assist the arrested Dutch ladies,” Bavaria said.

Anheuser Busch’s Budweiser is the official beer for the tournament and Fifa fiercely protects its sponsors from brands that are not its partners.

Bavaria has clashed with Fifa before over supporters wearing its orange clothes to stadiums.

Four years ago at the World Cup in Germany scores of Dutch men watched a match in their underwear after stewards ordered them to remove orange lederhosen bearing the name of Bavaria.

Dutch officials said the arrest of the two women was “disproportionate”.

Warning
Fifa said it had warned companies before the Soccer World Cup that South Africa had legislation criminalising ambush marketing.

“Fifa wrote to a large number of companies before the tournament, drawing their attention to this specific South African legislation, to avoid any unknowing infringements.”

The world football body said it was “appalled” that these companies “use innocent people as a tool to conduct these unlawful activities”.

“Fifa is looking into all civil remedies available and will await the outcome of the criminal case currently being run by the South African police service.”

Bavaria is not a World Cup sponsor and Fifa has built up a reputation for aggressively protecting the commercial interests of its sponsors. — Sapa, Reuters