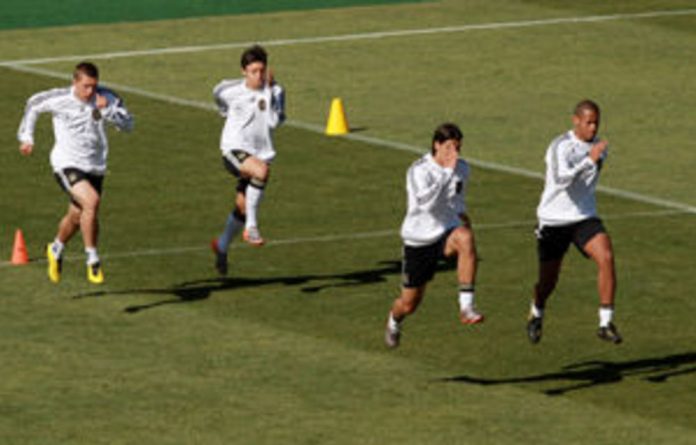 After producing the best performance in the first phase of Soccer World Cup group matches with their emphatic 4-0 win over Australia, Germany is being extra wary of Serbia.

“It’s [Serbia’s] last chance to stay in the tournament and we’ll have to be very careful and concentrated,” Germany assistant coach Hans Flick said of Friday’s match.

“Australia was no measuring stick and Serbia is a very good team, with players in top clubs in Europe. We’ll have to improve what we did well against Australia.”

Double dilemma
And so the Serbians face a double dilemma in the Group D match: the Balkan team is coming off a mediocre performance after losing 1-0 to Ghana, while Germany were at their clinical best against Australia to boost their claims to the title. Another loss will almost certainly end Serbia’s chances of progressing.

Serbia coach Radomir Antic said his squad had lost some confidence after their opening match, but was capable of rebounding against the Germans.

“We are facing the team that has shown the best football so far, in my opinion. I was impressed with their game,” Antic said Wednesday. “We know we have to rise to the occasion. That’s the trademark of real champions.”

Serbia’s only claim to a win over Germany at the World Cup came when the country was part of Yugoslavia, which beat West Germany in the 1962 quarterfinals in Chile.

“This upcoming match is really a historic match for us,” Antic said. “But Germany should also inspire us to regain the passion and joy in our game. We were too tight against Ghana, we failed mentally. All our players have to raise their level.”

Change of schedule
The teams were scheduled to have a training session Thursday at Nelson Mandela Bay Stadium, but Fifa told both sides on Wednesday that heavy rain over the past two days had damaged the pitch too much for practice at the venue.

The German squad has decided to delay their trip. The players will have their final training session before flying to Port Elizabeth on Thursday afternoon instead of at noon as initially planned.

Serbian striker Milan Jovanovic, who is set to join Liverpool from Standard Liege, said the loss to Ghana “affected our mood” and
that Germany’s big win over Australia didn’t help.

“They have been the best team so far,” Jovanovic said. “To beat them, we’ll have to raise above ourselves. We don’t want to ruin what we’ve done after only two games at the World Cup. We’ll have to be more courageous.”

“No team is here just to make up the numbers. Look at how Brazil struggled against [North} Korea,” Kacar said of five-time champions Brazil’s 2-1 win over the little-known team from the reclusive communist nation. “So anything can happen.”

Germany has been working on ways to isolate tall Serbia striker Nikola Zigic and prevent him from distributing the ball to teammates. The 2.03-metre Zigic uses his height to head long balls into the path of his teammates.

‘We will have to win those balls’
Midfielder Sami Khedira said the German team had been closely scrutinizing this aspect of Serbia’s game.

“We will have to win those balls laid on by Zigic,” Khedira said.

Midfielder Bastian Schweinsteiger has missed two of the those practice sessions because of a cold, but should be fit to play on Friday.

Flick said Schweinsteiger is getting better and although he sat out Wednesday’s team practice, he did do work on his own.

Germany is taking every precaution to try and ensure other members of the squad don’t get sick after the sudden drop in temperature this week and the arrival of wintery conditions.

The runner smashed her personal best in 2019, and will feel confident going to Tokyo in August
Read more
National

Corporations and banks that aided the apartheid regime have not been brought to book, so they continue to act with impunity
Read more
Opinion

The technology is permeating every facet of our lives, but few countries have laws to make it safe
Read more
Education

Get TVET colleges to work first before investing in new campuses

There has been an effort by the state to expand the TVET college sector. But the reality is that the systems at many of these colleges are simply not working
Read more
Analysis

The year of the locust

Across six countries in East Africa, swarms of desert locusts — some as large as small cities — are devouring their way through fields and farms. This is their story
Read more
Advertisting
Continue to the category
National