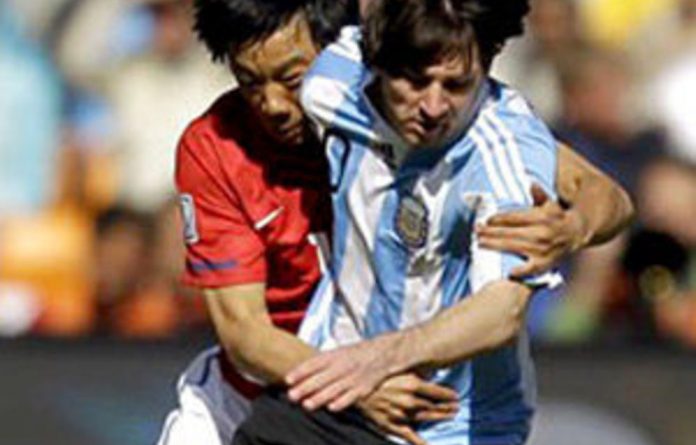 Gonzalo Higuain scored the first hat-trick of this World Cup as Argentina took a huge step towards the second round when they thrashed South Korea 4-1 in their Group B match at Soccer City on Thursday.

Diego Maradona’s confident side went ahead when Park Chu-young put through his own net after 17 minutes. They doubled their advantage when Higuain stayed onside after eluding the defence to pick his spot with a header 16 minutes later.

Higuain made it 3-1 with a tap-in after 76 minutes and got completed hat-trick with another header in the 80th.

South Korea had pulled a goal back at the end of the first half with the score at 2-0 when Argentina defender Martin Demichelis failed to control a simple ball and Lee Chung-yong robbed him and fired past Sergio Romero.

The result left Argentina top of the group with six points from their opening two matches followed by South Korea with three from their first two games.

Nigeria and Greece, who meet at Bloemfontein (2pm GMT), are looking for their first points. If the Greeks fail to win Argentina will be the first team to qualify for the knockout stages.

Argentina played some of the best approach work seen at the tournament so far and World Player of the Year Messi, Carlos Tevez and Angel Di Maria were outstanding in attack.

Messi went close to scoring what would probably have been the goal of the finals in the first half when he swapped passes with Tevez and breezed past three defenders but then saw his chip over goalkeeper Jung Sung-ryong go narrowly wide.

Tevez, Messi and Higuain combined early in the second half with a sweeping move before the latter’s shot was saved by Jung.

Korea’s goal from the last kick of the first half raised their spirits but, while they played far better after the break and should have equalised through Yeom Ki-hun just before the hour, Argentina never lost control and ran out easy winners. – Reuters