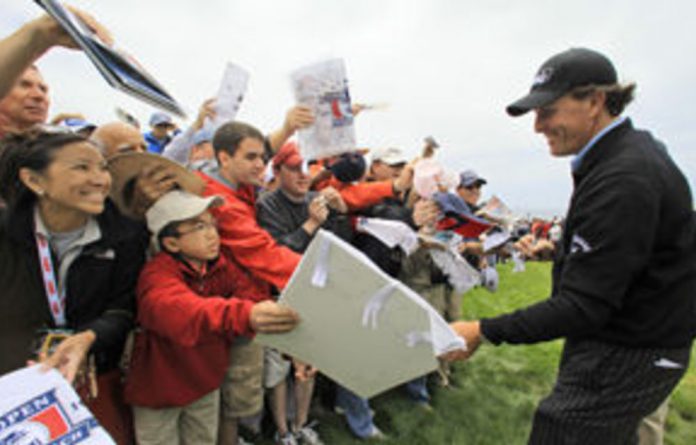 Phil Mickelson’s bid for a first US Open title and Tiger Woods’s search for greater consistency have dominated the build-up to Thursday’s opening round at Pebble Beach.

While several other compelling storylines have conspired to make the second major of the year among the most intriguing in a long while, most eyes will be fixed on the game’s leading players.

Left-hander Mickelson has clinched the PGA Tour’s Pebble Beach National Pro-Am three times while Woods delivered one of the best golfing displays ever at the 2000 U.S. Open when he stormed to victory by an astonishing 15 strokes.

“It was the greatest performance I’ve ever seen in the game, to shoot 12-under,” Mickelson told reporters while preparing for the first round. “That was the best ball-striking and the best putting tournament that’s ever been performed in my opinion.”

Much has changed, however, since Woods set record benchmarks in the game which have yet to be eclipsed.

Although he has won 14 major titles to trail only Jack Nicklaus (18) in the all-time standings, his golfing stock plummeted following his stunning fall from grace at the end of last year.

Woods quit the game for five months amid tawdry revelations of marital infidelities and has fallen well short of his own lofty standards since returning to the PGA Tour at the US Masters in April.

Neck pain
He has played in only four events on the United States circuit while battling neck pain and has parted ways with his long-time swing coach Hank Haney but believes he is now close to his best based on his practice sessions in recent weeks.

“As far as my game, I’m very excited about how it’s progressed,” said Woods, who has been paired with British world number three Lee Westwood and double US Open champion Ernie Els of South Africa for the first two rounds at Pebble Beach.

“The more time I’ve been able to practise and play, it’s starting to solidify and I’m actually really excited to tee it up on Thursday.”

While major question marks hover over Woods’s likely form, US Masters champion Mickelson is viewed by many of his peers and several leading bookmakers as the tournament favourite.

Despite several agonisingly close calls over the years and five runner-up finishes in his last 11 U.S. Open starts, the short-game magician has never won his national championship.

A Mickelson victory on Sunday would be an extremely popular one and would also elevate the San Diego native to number one in the world rankings for the first time.

“It’s a special tournament for me,” said Mickelson, who celebrated his 40th birthday on a sun-splashed Wednesday by practising at the exclusive Cypress Point close by on the picturesque Monterey Peninsula.

“Having come so close, this is a tournament I’d very much like to win. I still have a sense of pride in the way I’ve played, but I would like to win my national Open. Winning this would be something that would help define my career.”

Els, US Open champion in 1994 and 1997, felt Mickelson’s close calls had to be viewed in a positive light, and not regarded as near-misses.

“There are not too many guys that finished second five times,” the smooth-swinging South African said. “Phil’s in his home state this week and he’s won here before. He’s got good feelings and he’s got the best short game in the game. I think he’s got a great chance.”

Slick greens
Majestic Pebble Beach, frequently buffeted by ocean winds, has some of the smallest greens in golf and will present a tough challenge with the course running fast and firm.

“This is the fastest I’ve ever seen Pebble run, with the exception of maybe 1977 when we had the drought here,” said 1982 champion Tom Watson, who at the age of 60 will be playing his fifth US Open at Pebble Beach.

As ever at a US Open where ‘plodding’ rather than ‘birdie hunting’ is the name of the game, the ability to minimise errors and stay patient on slick greens and tight fairways flanked by thick, graduated rough will be defining traits in the make-up of this week’s champion.

It could also be a week to remember for one of the younger guns, who have already made a significant impact this year.