Will the real Kaka please stand up? 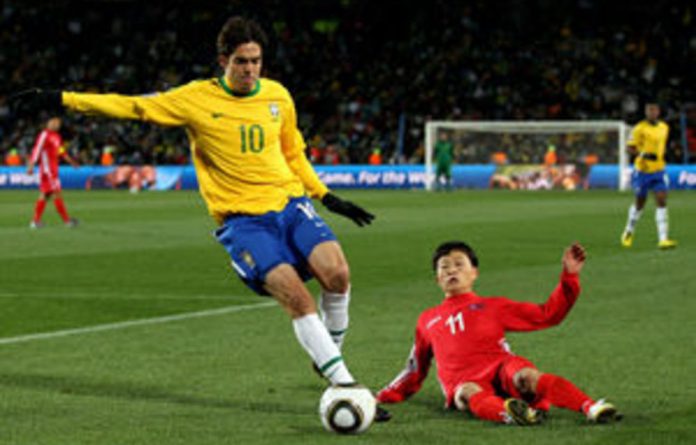 The big stars are not shining at the Soccer World Cup and that goes for the Brazilian number 10 Ricardo Izecson dos Santos Leite who seems a shadow of his better-known self.

That, of course, is the man commonly known as Kaka.

But the World Cup is still waiting to see the Kaka who was once World Footballer of the Year and named by Time magazine as one of the world’s 100 most influential people.

Brazil are hoping that person turns up when they play Côte d’Ivoire on Sunday at Johannesburg’s Soccer City stadium.

Against North Korea, the midfielder struggled to impose himself on the game.

Brazil expects more from a man wearing the iconic yellow number 10 shirt whose illustrious holders have included Pele and Zico.

There was plenty of endeavour but some unusual stray passes, and others, including the goal scorers Maicon and Elano and striker Robinho, were more influential.

Kaka, who came off in the 78th minute to be replaced by Nilmar, was nevertheless pleased enough with his performance and the apparent lack of any muscular problems.

“As a debut, I believe it was good. I didn’t know what condition I would be in for the World Cup because of injury, so I am happy. I hope to constantly improve, but the debut has been a positive one,” he said.

It is hardly surprising that Kaka is seeking his form after a season hampered by injuries. Coach Carlos Dunga, who will need the midfielder’s inspiration if Brazil are to win the World Cup, is pleased with his progress.

“We knew Kaka would not be playing the whole match. He hadn’t played in nearly five months,” said Dunga.

Dunga needs Kaka because he does not have a similar player running at defences from midfield, creating space for the likes of Robinho and Luis Fabiano and also capable of scoring himself.

Whether Kaka can reach the heights which made him the world’s best player when he was with AC Milan is another matter.

The Brazilian arrived at the World Cup still nursing a strain to his left thigh, one of the injury problems which had restricted his league appearances with Real Madrid on his debut season with the Spanish giants.

He conceded before the North Korea game he was unlikely to last the full 90 minutes, and the substitution came as no surprise.

“In each match I’m getting better and better,” Kaka said. “There is still a lot to improve, but that will come with time.”

Fellow midfielder Gilberto Silva is also confident Brazil will see the best of the player at the World Cup.

“In every game he will improve,” he said.

“It is very good to see him because he is really hungry to do well for Brazil and for himself. All the team are behind him and he has got the confidence of everyone. I am sure for the next games he will be much, much better.”

Kaka, who was signed by AC Milan from Sao Paulo in 2003, is a devout evangelical Christian who in 2004 became the youngest ambassador against hunger for the UN World Food Programme.

He attributes his recovery from a spinal fracture in a swimming pool accident at the age of 18 to his Christian faith, and raises his hands to the heaven in a gesture of thanks to God when he scores.

At 28 it is now the third World Cup finals for a player who should be reaching his peak.

In South Korea and Japan in 2002 he played just 25 minutes for the team that went on to win the tournament.

In 2006 in Germany, his one and only goal came when he scored the winner in Brazil’s opening game, 1-0 against Croatia in Berlin.

He failed to maintain the momentum and the team was eliminated by France in the quarterfinals.

The match against Côte d’Ivoire could be the ideal moment for Kaka to show he is getting back to his best.

Victory would virtually ensure progress from the group for Brazil. And if both Brazil win and Portugal defeat North Korea, Dunga’s side will be assured of a place in the last 16. — Sapa-dpa