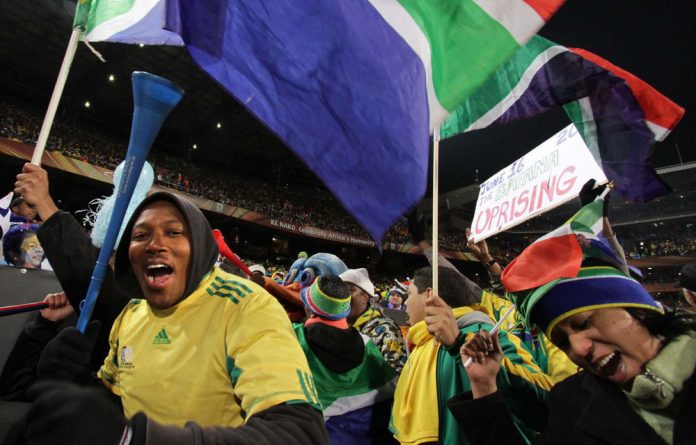 Bafana Bafana folded without much resistance in midweek, their much-vaunted revival all but a brief vision and their Soccer World Cup hopes now resting on the near impossible.

A chilly wind blew across Loftus Versfeld on Wednesday and took with it the warm fuzzy feeling a nation had conjured up over the past weeks. The hopes and expectations seemed a burden too big for a largely inexperienced South African side, who were thriving in the spotlight of pre-tournament success but quick to wilt when the pressure came bearing down.

It is a World Cup campaign that now relies on favourable results in the other group matches, plus the mere task of beating France in Bloemfontein on Tuesday.

From ayoba to sober

We watch Bafana’s match against Uruguay at the Radium Beerhall, one of Jo’burg’s oldest pubs. Eager fans share their thoughts ahead of the match and their disappointment following the 3-0 loss.

Even though the French are a shadow of the side that were World Cup winners and European champions just a decade ago, it would count among the list of major World Cup upsets were Bafana Bafana to produce a winning performance at the Free State Stadium next week.

The home side’s limitations on a stage as demanding as the World Cup have been laid bare during the past two matches, against Mexico and Uruguay, the latter a comprehensive 3-0 hiding that was the most severe home defeat Bafana Bafana have ever suffered.
Mentally the fortitude to turn the pressure into a positive has been missing, plus a dogged spirit failed to appear when it was most needed.

On Wednesday it looked as though once they got caught by a freakish goal from Diego Forlán midway through the first half the heads dropped and the fight fizzled out.

At a tactical level, the play has been predictable and, in execution, the South Africans’ form far too patchy. At times the passing was sublime but that was the exception rather than the rule.

A run of 13 unbeaten matches before the game against Uruguay held out hopes of a fairy-tale, but the easy manner of Wednesday’s capitulation was a stunning thud back to reality.

South Africa’s team were not quick enough, lacked adventure, were poor with their first touch and final pass, and without the necessary decision-making skills to compete at this top level.

Producing a team for this World Cup was always going to be a gamble, given the paucity of playing resources and the confidence-sapping results of past years.

Carlos Alberto Parreira sought to build on the strengths, believing there was no time to patch up the holes. He built his hope on fitness, a fast tempo and good ball circulation, giving technique and skill pride of place.

At times the team thrived on the philosophy but once the chips were down, they had no alternative vision to turn to.
That means that once the team loses its composure, starts belting aimless balls forward, crossing waywardly into the opponent’s area and giving away possession, they are effectively buried.

Uruguay forced South Africa into all these errors with a surprisingly adventurous approach, boosted by two of the world’s most exciting strikers. Forlán got all Wednesday’s plaudits but the constant prodding and nibbling at the defence by Luis Suárez was Uruguay’s real trump card.

Three across the middle seemed like six or seven at times, so quick were they to drop back when South Africa had possession. Never did Bafana Bafana get beyond the edge of the Uruguay box and very rarely that far anyway.

There was little adventure down the flanks either. Uruguay’s coach, Oscar Tabárez, had done his homework, introducing a pacy fullback to nullify any hopes the South African wingbacks had of storming down the flanks.

Katlego Mphela was left alone to fight manfully at centre forward, but was constantly outgunned. Parreira never saw any point in bringing on a second striker because, plainly, there was nowhere he was going to get service from, so dominant were the Uruguayans.

Admittedly, there were some freakish twists to Wednesday’s game, but there can be no denying the superiority of the South Americans.

Forlán’s opening goal was speculative and helped by a slight deflection, and goalkeeper Itumeleng Khune being caught by surprise and off his line.

The penalty seemed a harsh decision and the sending off for Khune ridiculous. Sacrificing Pienaar, albeit that he was tiring, instead of Teko Modise, to bring on a substitute goalkeeper was clutching at straws by a coach whose faith in players like Modise, Siphiwe Tshabalala and Mphela has only occasionally been rewarded.

Tuesday’s game is expected to see all three back again in pivotal roles. Parreira sees no other option.

Kagisho Dikgacoi is suspended and will probably be replaced by rookie Thanduyise Khuboni, who the coach has picked as a star of the future but who is, perhaps, not yet ready for the rigours of the World Cup. An alternative is MacBeth Sibaya, who is the best tackler and ball-winning midfielder this country has ever produced, but is not as effective going forward.

It took six years to build for the World Cup and six days for the dream to implode. South Africa now becomes like a waiter at a glittering banquet, inside the hall but unable to sup from the table.