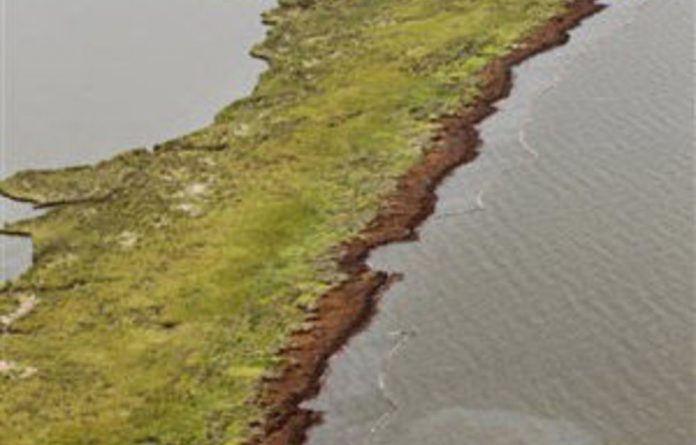 BP bosses weathered a week of anger in Washington but the energy giant’s financial outlook faces renewed scrutiny from investors trying to gauge remaining costs and risks from the biggest oil spill in US history.

Credit ratings agency Standard & Poor’s poured cold water on hopes a $20-billion spill fund paid for by BP would limit its liabilities. It downgraded BP on Thursday, citing the fund as a competitive disadvantage and saying it could downgrade again if costs from the huge undersea leak grow.

From 1,6km below the water’s surface, crude oil is gushing into the Gulf of Mexico 60 days after the disaster began. BP is siphoning some of the oil from the blown-out well using a containment cap system and is drilling relief wells it hopes will halt the leak in August.

Louisiana treasurer John Kennedy estimates environmental and economic damage could range up to $100-billion for his state and others along the Gulf Coast.

Tony Hayward, BP’s chief executive, survived a trip to the White House with his chairperson Carl-Henric Svanberg to meet an angry President Barack Obama on Wednesday and then endured a verbal assault from lawmakers on Thursday.

But Hayward’s repeated answers that he could not explain the causes of the spill and wanted everyone to wait for the investigations left some in Congress calling for him to go.

“No one at BP has been fired,” Florida Democratic Representative Kathy Castor told Reuters Insider after the hearing. “It’s time for heads to roll at BP.”

Political ammunition
The disaster has fouled at least 190km of US coastline, threatening multibillion-dollar fishing and tourism industries and killing birds, dolphins and other sea life.

But the $20-billion fund British-based BP agreed to with Obama may have unintended consequences — including a takeover by a rival and influence on US congressional elections in November.

The political storm picked up when Republican congressman Joe Barton of Texas, a major recipient of oil and gas industry campaign contributions, apologised to BP at the hearing.

“It is a tragedy of the first proportion that a private corporation can be subjected to what I would characterise as a shakedown, a $20-billion shakedown,” Barton said.

Hours later, under pressure from his own party leaders, he withdrew his apology to BP and said he was sorry for using the word “shakedown.” Democrats hungry for electoral ammunition jumped on the gaffe.

The fund, by clarifying at least some liabilities, could encourage larger rivals to pounce on BP, said Christopher Zook, chairperson and chief investment officer of CAZ Investments in Houston, who sympathised with the idea that the government should not mess in BP’s finances.

“I would be shocked if two years from now BP is still an independent company,” he said.

Executives from BP’s rivals — Exxon Mobil, Chevron, ConocoPhillips and Royal Dutch Shell — distanced themselves from BP at a congressional hearing on Tuesday, saying BP failed to adhere to industry standards in the construction of its gushing well in the Gulf of Mexico.

“Investors need to think of it as a speculative investment at this point,” Brian Youngberg, energy analyst at investment firm Edward Jones said of BP’s shares. “You’re getting no income and you’re hoping things go better.”

Decades of impact
The undersea leak began with the explosion on an offshore rig on April 20 that killed 11 workers and ruptured BP’s well, unleashing a torrent of crude into the Gulf of Mexico.

Environmentalists worry the political theatre in Washington is taking the focus off the disaster in the Gulf.

“This oil is already into the wetlands and more is coming up every day. You cannot clean it out of there,” John Hocevar, a marine biologist with Greenpeace, told Reuters in Louisiana. “The impact of the spill is going to be felt for decades.” – Reuters