Cameroon crash out of World Cup 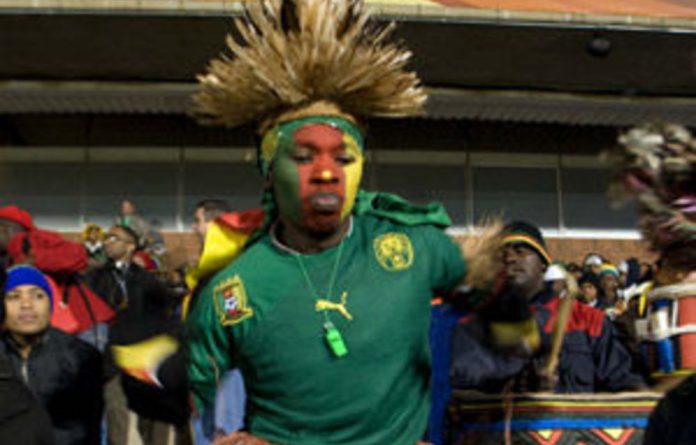 Cameroon is out of the World Cup. A 2-1 loss to Denmark on Saturday night at Loftus Versfeld stadium in Pretoria left the Indomitable Lions with zero points after two games and with their vanquishers and Holland already on four points in Group E, Cameroon become the first African team to exit this World Cup.

The West Africans started brightly enough when they opened the scoring in the 10th minute.

A sloppy pass from Danish centreback Simon Kjaer to right back Lars Jacobsen saw Pierre Webo intercept the ball and square to Samuel Eto’o who made no mistake with a sweetly struck goal past the diving Sorensen.

The Lions bossed things for about 10 minutes after the goal but Denmark methodically worked their way back into the game.

This was a contrast in styles.

The Danes pressed much higher up the field whenever Cameroon had the ball — at times making it hard for the Africans to work Jabulani out of their own half as space was closed down. On attack the Danes worked the ball around patiently, moving with dogged intelligence. They played little triangles down the flanks, patiently moving around and creating openings. It was during a period of sustained pressure of that sort which eventually lead to the equaliser.

Kjaer, the Danish centreback who plays for Italian club Palermo, made amends for his earlier mistake when, in the 33rd minute, he sprayed a scud-like cross-field pass from inside his own half to Dennis Rommedahl.

Rommedahl hared down the right flank on the blind-side of Cameroon defender Benoit Assou-Ekoto — who seemed caught out by the ball — and the winger squared easily for Nicklas Bendtner to slide home the equaliser.

Cameroon meanwhile, where playing more individualistically, but their measure of spontaneity — despite several chances, many of which were blasted over or wide of Danish keeper Thomas Sorensen’s goal — did not produce anything against a resolute and well organised Danish defence.

Then, in the 61st minute Arsenal striker Nicklas Bendtner sprayed the ball out wide to right wing-forward Dennis Rommedahl who swept past substitute Jean Makoun and when in the box, curled the ball past Hamidou Souleymanou in the Cameroon goal.

It was now two-one to Denmark and Cameroon started chasing the game fervently. In the 71st minute coach Paul Le Guen — who apparently faced a player insurrection and political suggestions before the match to change tactics and playing personnel — threw caution to the wind, bringing on forward Mohamadou Idrissou for central defender Sebastien Bassong.

Despite the creation of several chances — and the vociferous support of a large South African contingent in the 38 074-strong crowd — Cameroon could not produce the goal needed to draw the match and keep their dreams of a continued presence in the first World Cup on African soil alive.

Pretoria, with its Anglo-Boer war history of siege and imprisonment of rooinecks such as Winston Churchill, would appear an odd place for African reconciliation.

Yet, it is here where South African has been expressing its sense of continental fraternalism — when supporting Ghana in its 1-0 victory over Serbia last week, and again at this match — with deafening fervour.

It would be spurious to suggest that this sorry state of goodwill will exorcise the ghosts of the 2008 xenophobic attacks, but it does appear a little chip at that particular edifice.

Cameroonian Tina Mongo, who has lived in South Africa for three years, echoed the view of several of his countrymen which the M&G spoke to when he said: ‘Everybody is feeling good right now. There is much much less ill will than three years ago and the World Cup seems to have had that good effect on South Africans.”