Portugal in seventh heaven, Spain back on track 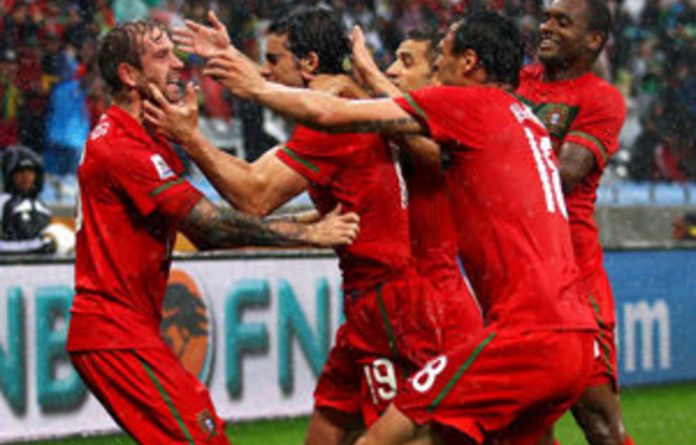 Portugal routed North Korea 7-0 in the World Cup on Monday while European champions Spain bounced back from a shock opening defeat to ease past Honduras and revive their hopes of qualifying for the last 16.

Spain, one of the pre-tournament favourites, must beat Chile on Friday in a Group H where they trail the Chileans by three points after the South Americans chalked up their second victory of the tournament when they edged the Swiss 1-0.

But the performance of the day came from Portugal who scored three times in eight minutes after half-time to set up the biggest win of this tournament, though they fell short of the record nine-goal margin achieved by Hungary twice and Yugoslavia.

The crushing defeat in Cape Town’s Green Point Stadium eliminated 2 000-1 rank outsiders North Korea from the competition and they will depart after their final Group G match against Côte d’Ivoire on Friday in Nelspruit.

The already-qualified Brazil face Portugal on Friday in Durban when a draw will be enough for the European side to progress. Portugal’s handsome goal difference means Côte d’Ivoire must score a hatful to have any chance if the Portuguese slip up.

North Korea coach Kim Jong-hun took responsibility for a mauling screened live in the reclusive country, admitting he got his strategy wrong.

“I think we played to our full potential but, tactically speaking, it fell apart and we could not block their attacks and that is why they scored so many goals,” he confessed.

Asked how he felt his countrymen would react, Kim said they would understand.

“Back home, I believe that they will look at our next game and they will be rooting for us to play well,” he said. “They will be encouraging us, I believe.”

Spain, whose campaign got off to a bad start when they slipped to defeat to the Swiss in their first game, re-discovered their swagger as they dominated Honduras to win 2-0 with two goals from Barcelona’s new signing David Villa at Ellis Park.

But Villa’s second-half penalty miss could be costly if Spain have to rely on goal difference should they only draw with Chile in their final group game.

“The important thing was to win this match and we did it,” said Spain coach Vicente Del Bosque.

“We created lots of chances which we didn’t make the most of. Now we have to prepare for a big pressure match against Chile.

“But these players are used to dealing with pressure. For them it’s another match in a very busy season.”

Having gone 48 years without a victory at a World Cup finals, Chile have now achieved the feat twice within six days.

They moved top of Group H thanks to a header from South African-born Mark Gonzalez 15 minutes from the end of a drab, foul-ridden clash in Port Elizabeth.

“This is fantastic. We prepared hard and I was lucky enough to get the goal today, so what could be better? We had to be patient, but now we can pretty much dream of the last 16,” said former Liverpool player Gonzalez.

France’s squad finally trained having refused to do so on Sunday in protest at Nicolas Anelka’s expulsion from squad for verbally abusing coach Raymond Domenech.

France are likely to exit on Tuesday when they must beat South Africa by a wide margin in Bloemfontein and hope Uruguay and Mexico do not get the draw which would mean they both qualify from Group A. — AFP

About 1 500 South Africans are stuck abroad, waiting to see if the government can help them to return home
Read more
Sport

The Frelimo party, which has ruled thenation since independence in 1975, is widely expected to again beat its former civil war foe Renamo
Read more
Sport

Claims of favouritism stalk the game, but the data on penalties paints a picture at odds with righteous indignation
Read more
Editorial

Editorial: One last chance to do good for SA

To effectively lead South Africa out of the morass, Ramaphosa must prioritise service to the people.
Read more
Politics

Siyanqoba rally a strong show of support for the ANC

Supporters at Sunday’s Siyanqoba rally were confident the governing party will win the May 8 elections, and the president feels no different
Read more
Advertising
Continue to the category
National