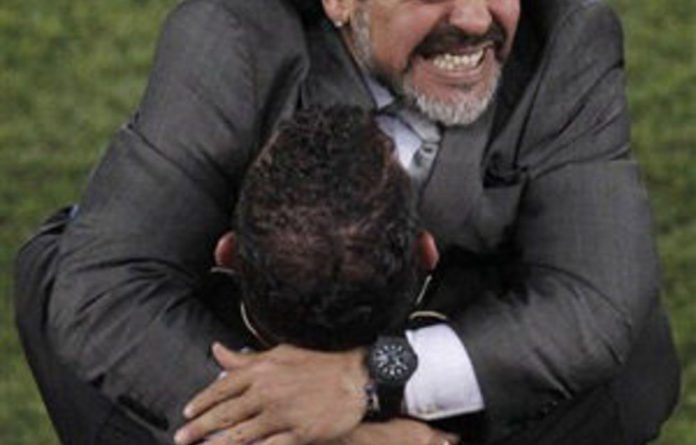 England, Brazil, or Argentina? South Africa fans are split on which team they will switch their allegiances to following the demise of their beloved Bafana Bafana.

The home supporters dared to dream during their match with France on Tuesday in Bloemfontein when South Africa surged into a 2-0 lead with the scoreline in the other Group A clash between Mexico and Uruguay also going in their favour.

But despite a brave effort by their side in downing the 1998 world champions 2-1, they saw their dreams die, becoming the first host nation to crash out at the first stage of a World Cup.

Now the yellow-clad supporters who were roaring on their team at the Free State Stadium are lining up behind other sides left in the tournament.

“Generally I’m an English supporter because of all the soccer we see. It’s always been the Premier League we’ve seen most over the years,” said Rashaad Domingo, who had travelled from Cape Town for the match.

“We also like Portugal and Brazil and the way they play their soccer,” said Domingo, an avid Manchester United fan.

Dany Chung, originally from Mauritius but who now lives in South Africa, is also transferring his allegiances to Fabio Capello’s men.

Page Makhalemele said he was disappointed that African teams had not done better in the first World Cup on the continent’s soil, saying he would like to see Diego Maradona’s Argentina go all the way.

“Brazil will win but I want the competition to go to [Lionel] Messi and would like to see Diego Maradona lift the trophy for Argentina as a coach,” said the vuvuzela-wielding Makhalemele.

Marco Badenhorst is also a fan of the two-time winners “because Messi is very good and they play great football”, but his brother Fredre is putting his money on Dunga’s Brazil.

“For me the second team I’m going to support is Brazil. The style that Brazil play is almost the same as South Africa play. South Africa has not perfected what Brazil are doing,” said Mokete Mekhoe.

Argentina have also caught his eye but his verdict on England, who struggled in their first two games, is that are a “team of big names and since the beginning of the tournament haven’t gelled.”

Meiring Vanderbergh is also backing Brazil. “They’re one of the biggest names and have done well so far. Also, they usually score goals and they are a team to support.”

Amanda Geldart also wants to see the five-time winners do well but is disappointed with what she has seen from England so far “because I thought they were a really good team”.

Inspiration
Meanwhile, political parties and government departments commended Bafana Bafana on Wednesday for their win against France, calling it an inspiration.

The team’s victory in Bloemfontein on Tuesday was “a tremendous display of football which united and inspired the nation”, the Democratic Alliance said in a statement.

“Our exit from the tournament should not detract from the nature of this result … a victory over former world champions, in front of our home fans, on the grandest stage of all.

“Bafana have showed all the passion we could have asked for, and this result must rank alongside our Africa Cup of Nations win over Tunisia in 1996 as one of the finest in our country’s footballing history,” said the party’s shadow minister for tourism, Greg Krumbock.

While Bafana Bafana were now out of the competition, the Inkatha Freedom Party said the team not only displayed its ability to take on world giants, but unite the country as well.

“They have united South Africans across the racial and culture divide and have served as an inspiration to all of us,” said Bonginkosi Dhlamini, the party’s spokesperson on sport, in a statement.

Echoing an earlier statement by the ANC Youth League, Dhlamini said the victory should be used “as a stepping stone for future successes”. — Sapa, AFP