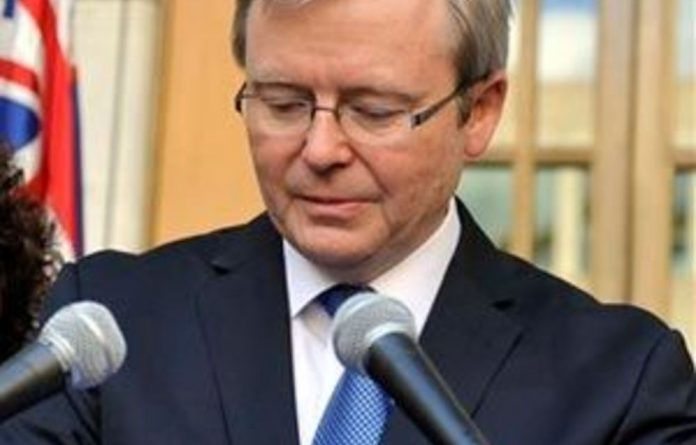 The tough, flame-haired Gillard was elected unopposed in a shock Labour Party ballot called just hours earlier, saying she could not “sit idly by” as public and factional support swung dramatically away from the former leader.

“I asked my colleagues to make a leadership change because I believe that a good government was losing its way… and at risk at the next election,” Gillard said. “I was not going to sit idly by.”

Gillard (48) pledged to seek a popular mandate within months, and set about reversing the issues that sank Rudd by pursuing a dropped carbon-trading scheme and urging mining chiefs to cancel a TV campaign against a planned new tax.

The plea drew immediate dividends as BHP Billiton, the world’s biggest mining company, cancelled its TV ads as a “sign of good faith”.

Thursday’s quickfire developments cemented a remarkable rise for the unmarried Gillard, who battled through the party ranks, and sneers over her lack of children and strong Australian accent, to become Labour’s leading light.

But analysts raised questions over the manner of her ascension, which came through shady backroom deals hatched by political power-brokers and ended in a hasty dismissal for Rudd, elected by a landslide in 2007.

Rumblings of a leadership change surfaced only late on Wednesday, when Rudd emerged from talks with Gillard to announce the surprise parliamentary party vote on Thursday morning.

Analysts were stunned at the fall from grace of Rudd, who plummeted from record support levels to become the first Australian prime minister deposed in office since Labour’s Paul Keating unseated Bob Hawke in 1991.

The bookish, centre-left technocrat rode high in the polls after ousting conservative John Howard and only slumped in recent months after shelving the carbon-trading scheme and suggesting the unpopular mining tax.

“The remarkable speed of this change is mind-blowing,” said political commentator Elizabeth van Acker. “This time yesterday [Wednesday] there was no public indication this would happen.”

Rudd’s policy bumps and somewhat stiff persona gave rise to a public image of the former prime minister as being long on rhetoric and short on real accomplishments, as well as something of a control freak.

Emotional
An uncharacteristically emotional Rudd (52) repeatedly paused to choke back tears as he faced the press, flanked by his family, in Canberra.

“I was elected by the Australian people as prime minister of this country to bring back a fair go for all Australians, and I have given my absolute best to do that,” Rudd said.

“What I’m less proud of is the fact that I have now blubbered,” he added.

Gillard is now tasked with turning around the fortunes of a Labour Party that has been flirting dangerously with becoming the first government since World War II not to secure a second term.

The straight-talking lawyer, known for her savage put-downs, has forged a reputation as a formidable parliamentary performer since taking on the demanding employment and education portfolios under Rudd.

Gillard’s deputy prime minister was named as Treasurer Wayne Swan, who is credited with easing Australia through the financial crisis without entering recession and will travel to this weekend’s G20 summit in Canada.

The highly rated Gillard had played down prospects of a leadership tilt for several weeks after a poll showed her breathing down Rudd’s neck as preferred party leader.

“There’s more chance of me becoming the full-forward for the Dogs [Western Bulldogs Australian Rules football team] than there is any chance of a change in the Labour Party,” she said last month.

The rapid developments even stunned Gillard’s family, which emigrated from Wales in 1966.