Hawkers suffer as Bafana crash out of Cup 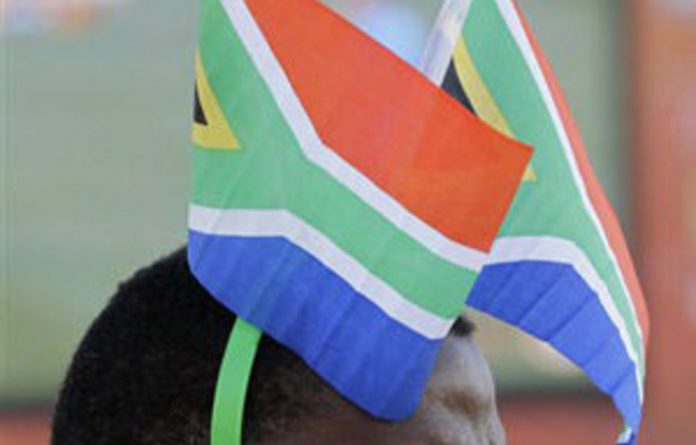 Johannesburg street sellers were raking it in at the start of the Soccer World Cup, but now that Bafana has crashed out of the tournament, business has slumped.

Some are even considering giving their SA flags away for free.

“At first, it was fire,” says Patience Bwanya (20) snapping her fingers to illustrate how fast local flags and rear-view mirror socks were selling.

“But now, there is no business,” she sighs, shrugging.

Patience’s husband, Elias Bwanya (23) — an artist who makes his living selling beaded wire animals on Oxford Road — says even he climbed on to the SA flag bandwagon.

“I saw business was good so I left the artwork and started selling flags,” says Bwanya.

But since Bafana Bafana crashed out in the first round, business has dropped off. He has returned to selling his craftwork on the street corner — but says tourists do not seem interested in buying his beaded lions and farm animals.

“Hopefully, soon, they will start buying my art. I still have 20 South African flags left. I think I will just give them away for free with every artwork sold, because nobody is buying them anymore.”

Economists are in agreement that the run-up to the biggest sports event in the world must have boosted informal traders.

“I would say that the informal sector has been hit very, very hard by the recession, and it’s probably very happy about this World Cup because it is certainly doing a lot better now,” said economist Mike Schussler.

“I think even if it is just that which Fifa is bringing … it’s actually very good for the informal sector.”

But Schussler says it is difficult to estimate the value of the cup to the informal economy, because there are no formal figures on its size.

He says there was a big debate about it in economic circles a few years ago and some guessed the informal economy comprised 7% or 8% of the total economy.

“Whereas, the World Bank estimated it could be up to 28% … so it’s a huge difference [in estimates].”

Economist Dawie Roodt said an “urban legend” put the informal sector at between 10% and 20% of the total economy, but pointed out the effects of the World Cup on the informal trade went further than selling a flag on a street corner.

“It is the multiplier effect that is so significant … when the Blue Bulls played in Soweto, people bought flags, and then went on to buy beer in shebeens in Soweto… and now there’s talk of hosting more rugby games there.

“When you start stirring the economical pot, things happen which one could never have predicted. And it is that type of knock-on effect that has had a positive impact on the informal sector, which really seems to have scored a lot,” said Roodt.

But for the traders in Oxford Road, the good times seem to be over.

Street seller Tendai Nene (33) has reverted to Plan B — selling Argentinean flags, but says no one seems interested.

“It’s bad, it’s very bad,” says Nene, looking on as another woman, with a baby on her back, gets “no” after “no” for her German and English flags from motorists. – Sapa