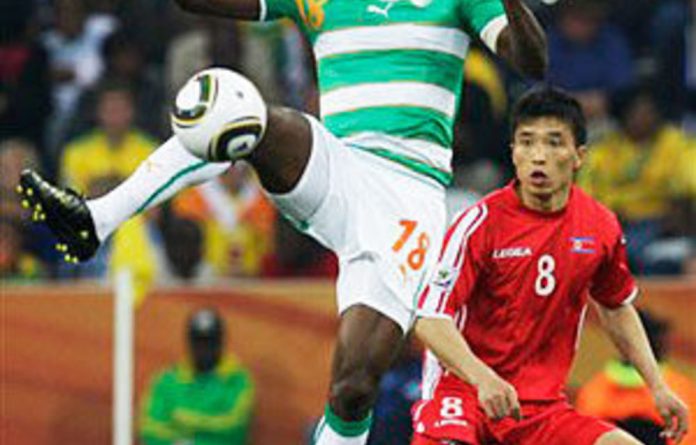 The early elimination of five of the six African teams in the Soccer World Cup, a tournament being held on their continent for the first time, has surprised Côte d’Ivoire coach Sven-Göran Eriksson.

Speaking after his own side bowed out of the World Cup despite a 3-0 win over North Korea at the Mbombela Stadium in Nelspruit, the Swede expressed his disappointment at the way African sides have capitulated in their backyard.

‘It is a surprise for me that African teams have been eliminated so early. You would have thought that more teams from Africa would go through in a tournament that is being played in their continent,” said Eriksson.

Of the African teams, only Ghana have made it to the last 16.

Still, he was happy with the overall performance of his team. ‘We were in a very tough group — in fact, the toughest in this tournament. I am really proud of the way this team has played. The future certainly belongs to this country in terms of football,” he said.

Côte d’Ivoire drew 0-0 with Portugal in their opening match and lost 3-1 to Brazil in their second match. North Korea’s 7-0 loss to Portugal was really what spelt the end of road for arguably the best team in Africa at the moment. The Elephants went into Friday’s match needing no less than eight goals to have a chance of going through. With the Asians out to redeem themselves, it proved an insurmountable task.

Even with the odds stacked against them, the opening minutes offered some glimmer of hope for the West Africans. Seydou Keita missed a glorious chance in the first minute when he found himself face to face with Korean North with goalkeeper Ri Myong Guk. The Galatasaray winger, however, shot straight at the keeper.

Next captain Didier Drogba hit the back of the net but was ruled offside.

The Elephants continued to press forward in search of the opener. It finally came just after 14 minutes when Yaya Toure slotted the ball into the far corner. The Mpumalanga crowd were impressed. They got behind their African brothers, singing Shosholoza and doing the Mexican wave in between the deafening sounds of vuvuzelas.

Their efforts paid off as Côte d’Ivoire scored again barely five minutes later. Drogba turned his marker beautifully and unleashed an unstoppable shot that crashed against the upright. Alert young Romaric headed in the rebound.

Golden generation
Touted as the golden generation of Côte d’Ivoire football, this team was at times its own worst enemy after the two goals. Poor decisions in front of goal restricted them to a 2-0 lead at half-time. As desperation crept in in the second half, North Korea began to create chances of their own on the counter. For the first time, Côte d’Ivoire goalkeeper Boubacar Barry was called into action. He twice denied lone striker Jong Tae Se, while Manchester City central defender Kolo Toure was also forced to throw his body on the line to save what would have been a sure goal for the hardworking Tae Se.

Salomon Kalou came on from the bench to make it 3-0 in the dying minutes of the game to complete the scoring.

Speaking after the game, Drogba could not hide his disappointment at the prospect of catching an early flight home. ‘Our World Cup is over today. We are disappointed at the time we are out. We cannot really beat ourselves up too much, though, being in group like this one. Portugal and Brazil are better than us.

‘Maybe if we were in a better group , we could have gone though. It is still fantastic for Côte d’Ivoire to be in a World Cup twice in a row,” said Drogba.

The West Africans made their debut in the finals in Germany 2006. Like in this tournament, they had the misfortune of being drawn in the group of death, along with Argentina, , The Netherlands, and Serbia and Montenegro. They only won against Serbia and Montenegro, lost to the other two giants and went home at the conclusion of the first-round matches.