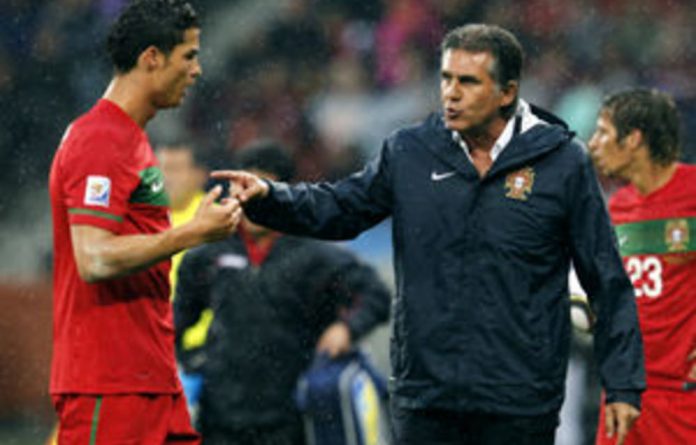 Five-time champions Brazil have already qualified for the round of 16 having racked up a 2-1 win over North Korea and a 3-1 victory over Ivory Coast to sit pretty on six points. A draw would see them top the group.

Portugal, on a run of 17 matches without defeat, drew 0-0 with the Ivorians before routing North Korea 7-0 to put them in second spot in the group and needing only a draw to advance to the next round.

But Queiroz, former assistant to Sir Alex Ferguson at Manchester United, vowed that his side would gun for victory, with Côte d’Ivoire needing to win handsomely against North Korea to keep in the hunt for second.

“The most important thing is that we play with a view to qualifying for the round of 16, that is our main objective. Brazil is not in that position as they have already qualified. So there must be no error or doubt on our part,” he said.

“We’ve seen [Brazil coach] Dunga’s team playing. If you haven’t got a good balance between attack and defence, they simply take you apart. We know we’re playing a great team with a great coach in Dunga.

But Queiroz said Brazil would miss suspended playmaker Kaka and highlighted his side’s impressive defensive record as reasons to be confident.

“The fact we’ve conceded no goals so far means we’ve defended well. But we will also have to attack well. When we have possession, we’ll have to exploit any opportunities Brazil might offer us,” the Mozambique-born coach said.

“We’ve played 25 games together over the last two years, and we’ve kept a cleansheet in 21 of those matches. It’s a great record for the team, and shows it’s well balanced.

“But tomorrow is a World Cup game against Brazil, one of the favourites with the number one Fifa ranking. It’ll be very tough for both teams.

“With the quality of the players both teams have at their disposal, we can expect some spectacular football.

“That’s what the World Cup is all about: the players and the beautiful game. We’ll endeavour to try to play. Football must be king at the end of the World Cup.”

On Kaka’s absence, Queiroz said: “It’s obvious that the Brazilian golden trio is made up of Robinho, Luis Fabiano and Kaka. When they play together they score goals.

“It’ll be interesting to see who they bring in for Kaka.”

Queiroz also hinted that a draw would satisfy him.

“Of course any victory over Brazil is a great result for any team,” he said. “But even a draw is something noteworthy. We’ll have to use all our skills to make sure we qualify.

“When two great teams like Brazil and Portugal play, everything is possible. I’m sure it’ll be a great footballing show and great entertainment.” — AFP