Tears as Italy trounced by Slovakia 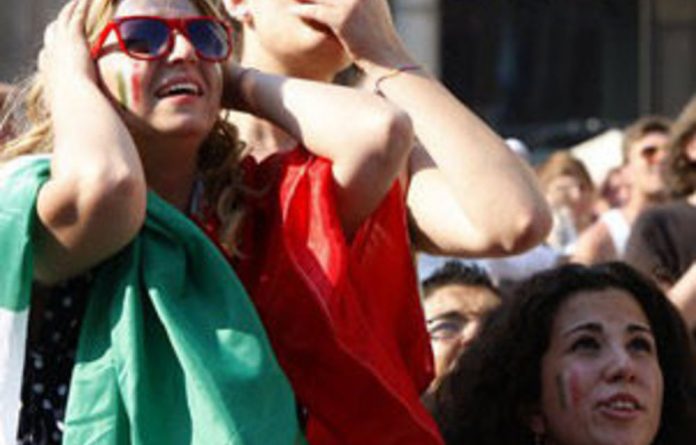 In the latest in a series of World Cup surprises, another traditional winner has been sent home after the first round.

Before the match Italian captain Fabio Cannavaro put the Azzurri’s poor performance and run of draws down to the team’s notorious reputation for slow World Cup starts and searing finishes.

In Spain in 1982, they squeezed through the first round with just three draws before going on to win after a sudden scoring streak.

Cannavaro, who will now retire from international football, clearly hoped for a repeat. “The best is yet to come,” insisted the football idol before the match.

But 1982 was history, as it appears is the former glory of the ageing Italian team that took to the pitch on Thursday under sunny Johannesburg skies.

Terse coach Marcello Lippi acknowledged as much in post-match interviews. “I think that the level of Italian football is not the level you saw tonight,” he said at a press conference after the match.

Italy still gets the prize for slow starts. They seemed to wake up in the last 20 minutes of the game, when the field came alive as they raced to equalise.

Antonio Di Natale’s 81st-minute goal and Fabio Quagliarella miracle work in the second minute of overtime — plus a near goal by Simone Pepe in the dying seconds — just wasn’t enough.

It left Quagliarella in tears and he had to be comforted by Cannavaro as they left the field.

Meanwhile, Lippi — who was named the world’s best football manager by the International Federation of Football History and Statistics (IFFHS) in 1996 and 1998 — and world’s best national coach in 2006, was thoroughly dejected but not defensive. He was willing to take the blame — and fans were more than happy to heap it at his door.

“Write two things down,” instructed Italian fan Michele Ciccerese as he left the stadium in a huff. “Germany 2006 winners Italy and Frances are both going back home. And both for the same reason: their coaches.”

Lippi, who is no doubt desperate for his planned break from football after this World Cup, acknowledged he was responsible — for the team’s successes as well as its failures.

“I take all responsibility for what happened, because if a team shows up at such an important game with terror in their head, heart and legs and if the team is unable to express its abilities it means the coach didn’t train that team as he should have done, psychologically, technically or tactically,” he said in Italian.

He coached the national side from 2004 to 2006, leading the boys in blue to World Cup victory in 2006. After the team performed dismally in the UEFA Euro 2008 under his successor Roberto Donadoni, he returned in 2008.

But instead Slovakia, who was previously torn apart by group winner Paraguay, seemed to suddenly come alive as a team, with quality defence and attack skills that saw them win the day.

“We are happy, but we don’t know how it happened,” said Slovakian Ivan Velicky. He expected less, given the team’s performance in the previous two matches of the round. It’s a repeated criticism that clearly got to the team, who marched in and out of the media zone without so much as a smile or word for the reporters. It was difficult to imagine this was the side that had confounded their critics and beat the world champions to advance to the next round.

A Slovakian journalist claimed the team were boycotting the media after excessive criticism from fans and journalists in their country. But the side’s medical advisor, Viliam Fischer, put their morbid demeanour down to shock.

“We played two games but we played them very badly. Now this is their first good play — against the champions. It is a shock for them.”

Fischer, one of the few from the Slovakia camp who would talk, credited the win to Coach Vladimir Weiss’s nose for the Italian’s faultlines.

Meanwhile Weiss was close to tears at the press conference. “After the birth of my son, it’s the second-best day of my life,” he beamed.

Shunning the translation service, he told reporters in broken English that Slovakians were celebrating in the streets.

He took the opportunity to tell his wife he loved her, saying she was more worried than he was in the run-up to the match. “But everything is OK now,” he said.