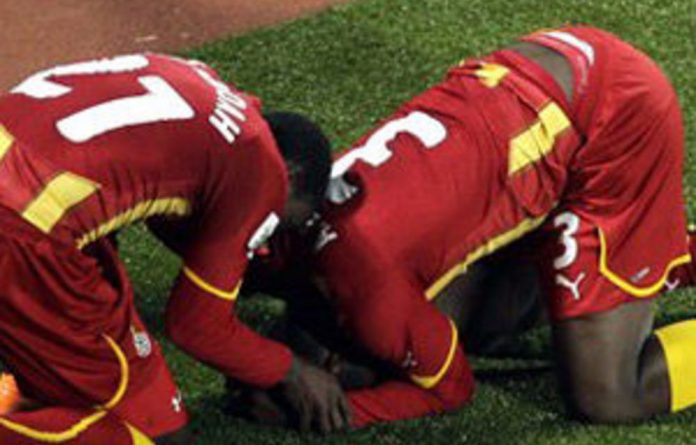 A spectacular left-foot strike by Asamoah Gyan in extra time sent Ghana into the World Cup quarterfinals with a 2-1 win over the United States on Saturday.

Gyan ran on to a long ball from midfield, shrugged off two defenders and fired home a venomous shot that sees Ghana match the best previous performance by African teams at a World Cup.

The goal came after Ghana had been subjected to long periods of sustained American pressure with the teams having gone into extra time with the score tied at 1-1.

Ghana, who face Uruguay in the last eight on Friday at Soccer City in Johannesburg, are only the third African team to reach the quarters after Cameroon in 1990 and Senegal in 2002.

The US had fought back strongly after a sluggish first half, in which they fell behind to a fifth-minute goal from Kevin-Prince Boateng.

Landon Donovan, who had been the hero of their dramatic qualification for the knockout stage in midweek, equalised just after the hour mark from the penalty spot.

German-born Boateng, who qualified to play for Ghana on the eve of the finals, stole the ball from Ricardo Clark in midfield and ran on to fire home from the edge of the area in a perfect start for Africa’s last representatives at this World Cup.

Donovan struck his spot kick in off the post to give the Americans a deserved equaliser as they suddenly found the energy to stage what has become a customary second-half rally.

Jozy Altidore might have snatched victory for the Americans 10 minutes from the end of normal time after getting the better of the Ghana defence, but hooked his shot wide.

After Gyan’s goal, his third of the tournament, substitute Benny Feilhaber had a shot blocked in a goalmouth melee as the Americans attempted another comeback but it was not to be. – Reuters