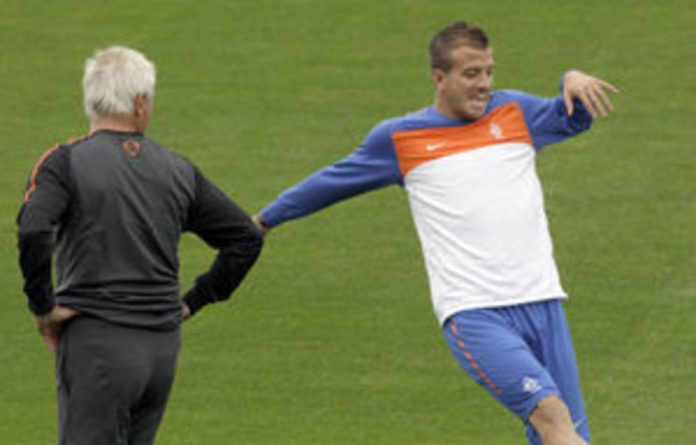 Dutch coach Bert van Marwijk has told his team to buckle down in their second round World Cup match against a Slovakian side he said lacked any “stars”.

Two-time finalists the Netherlands joined Argentina as just two sides who negotiated their group phase with three victories, but van Marwijk said complacency had crept in during their final match against Cameroon.

Leading 1-0 in that game, the Dutch eased off to allow the African side an equaliser before substitute Klaas-Jan Huntelaar made it safe at 2-1.

“After the Cameroon match, I spoke to the squad. We often have that period of sloppiness after we take the lead. I said we can’t afford that,” said van Marwijk.

“The third game was less good, and we could have just lost it.”

Dutch captain Giovanni van Bronckhorst hinted that the riot act had been read.

“The second half against Cameroon was not good,” the Feyenoord defender said. “It’s been made clear that should we suffer a lapse like that again, we might have to go home.”

Van Marwijk, however, said he expected a committed display from his star-studded squad.

“The players thoroughly understand what this game is all about. I expect a very motivated group of players, there’s only room for improvement,” he said.

Tough opponents
“Slovakia are a very rigid and tough team. They don’t have any stars, though I know a couple of their players from the Dutch league.

“They’re a team which are very tough to play against.”

Van Bronckhorst said he had been impressed by the Slovaks’ 3-2 win over defending champions Italy, a victory that ensured their qualification for the second round as group runners-up behind Paraguay.

“I saw Slovakia’s match against Italy, and they played very well, they deserved to win that match,” he said.

“They’re good at defending and good on the counter — that’s how they scored against goals against Italy.

“All teams that advanced to the round of 16 deserved to. It’ll be tough to win: we all want to be world champions, so that means we’ve got to win.”

Van Marwijk kept his cards close to his chest about fitness concerns over Rafael van der Vaart and Arjen Robben.

“Rafael had a sort of cramp in his calf, which might point towards some sort of sprain. He felt it after the match against Cameroon. Yesterday he joined in training without complaints but it’s still there,” he said.

“As for Arjen, well he played 20 minutes against Cameroon and there was no real reaction. He’s doing better every day. But he told me he doesn’t feel completely free, so we’ll see tomorrow and make the decision then.” — AFP