Fifa ignores the blunder in Bloemfontein 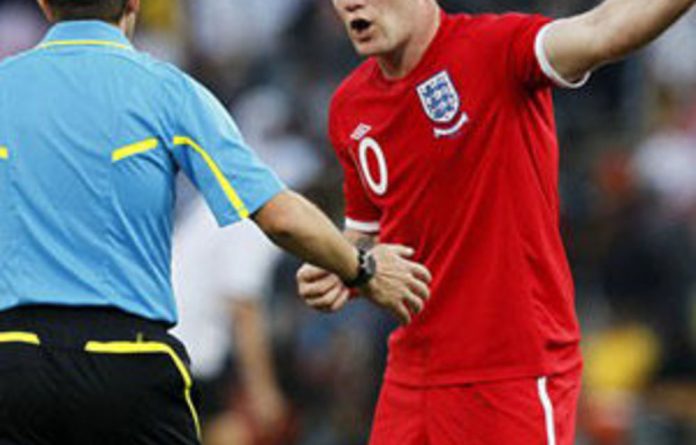 Sepp Blatter must be squirming. If he isn’t, he should be.

Why is it that the Fifa boss uses modern technology when it suits him — to burnish his public persona by tweeting, for example — but not when it would do some good for global football, the game whose interests he is meant to be taking care of?

Blatter merrily tweeted on Sunday that he was on his way to the historically charged World Cup match between Germany and England.

Since he was at the Free State Stadium, we must assume that he saw the Blunder of Bloemfontein with his own eyes.

It was impossible to miss — unless you were a linesman from Uruguay called Mauricio Espinosa.

Please, let’s not fall into the trap of saying that Espinosa’s failure to see that the ball crossed the line was merely 1966 in reverse, some sort of karmic retribution for Geoff Hurst’s goal in the 101st minute against Germany in the World Cup final 44 years ago. All this time later, it is not possible to say with 100% certainty that Soviet linesman Tofik Bakhramov called it correctly when he said Hurst’s strike crossed the goal-line.

But this time in South Africa was entirely different. Lampard’s lob was clearly at least the length of a player’s shoe over the line and into the German goal. Not even a close call. This wasn’t poetic justice for Germany. It was an English goal.

Fact: Espinosa should have seen it. Practically everyone else did, without the need for video technology. It was visible with the naked eye. England coach Fabio Capello actually started celebrating before he realised, horrified, that the goal wouldn’t be given.

“From the bench, I saw the ball go over,” Capello said.

David Beckham, at halftime, went over to the referee, holding apart his hands like an angler boasting about the size of a prize salmon he caught. The message: Ref, it was that far over the line.

German coach Joachim Loew agreed: “I saw in the television this ball was behind the line, it must have been given as goal.”

Fact: The goal, had it been given, would have pegged the score back to 2-2 and perhaps altered the complexion of the match entirely. Instead, at 2-1 to Germany, England was forced to chase for another score. The English left themselves vulnerable at the back as they pushed forward. The German players didn’t need to be asked twice to take up the English invitation to attack them on the counter.

Fact: Germany’s far younger and more coherent side was much better than England’s and deserved the win that puts it into the quarterfinals. Lampard’s un-allowed goal should not mask the fact that England had a poor World Cup. England has wonderful players who play in the world’s toughest league but yet, as a national side, it cannot be taken seriously as a football power. Capello has failed in his lavishly paid job to change that enigma.

Fact: technology exists that could quickly tell referees whether balls crossed goal-lines. Fifa has even experimented with it. Balls could be used with an embedded chip that sends the message “Goal” or a beep to the referee’s earpiece. Or Hawkeye’s all-seeing eye could be used, as it is in tennis for disputed line calls.

But Fifa prefers the Dark Ages. Three months before this World Cup, it ruled out further experiments with goal-line technology.

“Technology should not enter into the game, whatever are the opinions,” said Fifa’s general secretary Jerome Valcke back then. Because of Fifa’s oft-stated refusal of machines, even the Blunder of Bloemfontein is unlikely to change its mind. As those who love football raged about and debated Lampard’s un-goal, Fifa said on Sunday night it would not comment on the performance of the referee from Uruguay. The un-goal was also edited out of a two-minute highlight reel of the match on Fifa’s website. Basically, Fifa doesn’t want to know.

That the eventual score was 4-1 to Germany also gave it a teeny-weeny fig-leaf to hide behind because it could be disingenuously argued that Lampard’s goal would not have made a major difference to the eventual result.

What dinosaurs. Fifa fears that technology would undermine the authority of referees and their assistants. But the reverse is in fact happening. Match officials are being made to look like idiots because they are not getting the help that they need.

Football, like life, can never always be fair. The game is too complex, too fast-moving for video technology to be used in most situations. Stopping every few seconds or minutes to see whether players committed fouls or to inspect some other action would break up the rhythm of matches. And video replays are often not 100% conclusive, so humans would still be needed to interpret what is being shown on screen.

But balls, as Lampard proved, can bounce in and out of goal so quickly that a linesman can miss it if he’s not paying attention, blinks or for whatever is looking away. That’s why technology is needed. The time to introduce it was yesterday.

Blatter has some explaining to do.

John Leicester
John Leicester works from Paris, France. A bit of this, a bit of that, always for The Associated Press. France-based, with itchy feet. Jack of all news trades, possibly mastering some. Words and images John Leicester has over 3208 followers on Twitter.
Facebook
Twitter
WhatsApp
Linkedin
ReddIt
Email
Print