Referees defend themselves after blunders 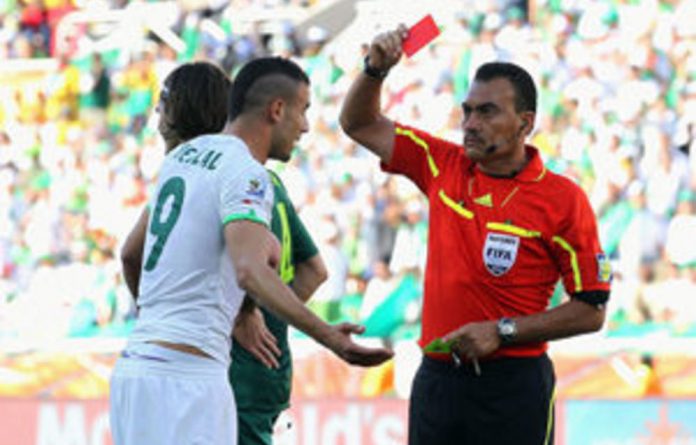 World Cup referees defended themselves on Tuesday in the wake of officiating blunders that led Fifa president Sepp Blatter to apologise to England and Mexico and reconsider video goal reviews.

Referees Jorge Larrionda of Uruguay and Roberto Rosetti of Italy, at the center of the controversial decisions, did not attend an open training session with reporters at a local high school, leaving others to address the issues.

England’s Frank Lampard had what would have been an equalizer disallowed by the Larrionda crew in a 4-1 loss on Sunday to Germany although the ball was clearly beyond the line in television replays.

“I share the disappointement with the match officials if it was seen as an error, and that was my over-riding feeling on that incident,” English referee Howard Webb said.

And Argentina striker Carlos Tevez was clearly offside when he scored the first goal in a 3-1 Sunday victory over Mexico. A replay shown in the stadium video screen was not enough to allow Rosetti to make the call.

“We know when we go into this business there are going to be controversial decisions,” Canadian assistant referee Hector Vergara said.

“In all of our games, 97% of our calls are right. The players aren’t perfect 100 percent of the time. Why should the referees be?”

Uzbekhistan referee Rashan Irmatov, who made his World Cup debut in the South Africa-Mexico opener, was confident referees could handle video review.

“If Fifa takes this kind of decision, we will be ready,” he said. “But it’s not my job to make that decision. I’m here to referee the matches.”

Vergara said he doubted video replay would change things much for referees.

Webb was ready for anything that would boost the credibility of referees.

“I’m open minded about anything that makes us more credible as match officials but it’s a decision for other people to take,” Webb said.

Mexican referee Marco Rodriguez defended humans over technology when it comes to officiating but said officials would work with video replays if Fifa commands.

“The referees have been very professional,” Rodriguez said. “In this training, you learn how to handle matches in a professional manner. We work together as a team. We’re not perfect. That’s reality. But we do our best.”

When it came to the blunders that hurt England and Mexico, Irmatov said there has been little talk among officials.

“We don’t speak about this situation,” he said. “You see how hard we work. We work really, really hard not to make a mistake.”

Rwandan linesman Celestin Ntagungira said it was important for officials to stand by their choices.

“You can’t change your decision,” he said. “When the goal is scored and you say it’s a goal, you have already validated the goal. How can you say it’s not a goal?”

“In your decisions and position, the offside line is the priority, absolutely,” Hungarian linesman Tibor Vamos said. — AFP