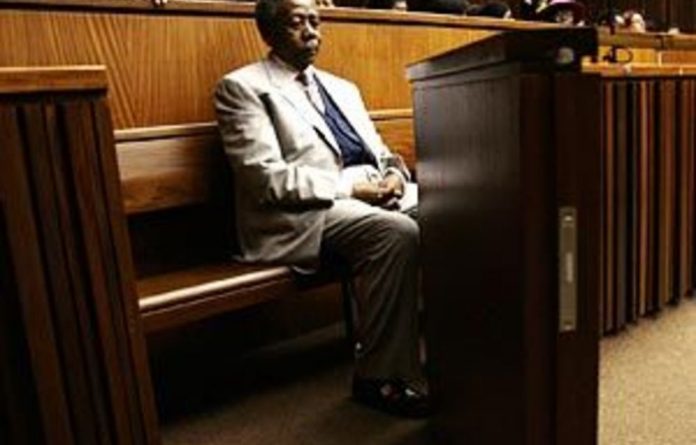 Tea time was a short reprieve from Judge Meyer Joffe’s recount of the state’s evidence in the trial of former top cop Jackie Selebi.

Thursday should see the end of Selebi’s harrowing trial, which has lasted eight months. Selebi is accused with corruption and defeating the ends of justice.

In handing down judgement, Joffe spent a fair amount of time on the state’s main witness, drug dealer Glenn Agliotti, who he described as “a large man of imposing physical appearance — He is relatively well spoken, he always appeared well dressed — he stayed at the best hotels and flies business class — he deliberately gave the impression that he likes the better things in life.”

Joffe also ruled that a January 2006 DVD, in which Agliotti is seen meeting with former crime intelligence boss Mulangi Mphego, would be admitted as evidence. It was previously admitted only provisionally. In the video, Agliotti claims that he never paid any money to Selebi.

“When balancing the interests, the scale must favour the accused,” said Joffe. “If the DVD goes a long way in establishing his innocence, it would be unfair to discount in from evidence. The video evidence is ruled to be admissible.”

Earlier, the atmosphere was solemn in Court 4B as Joffe started handing down judgement.

Microphones, cameras and video cameras were allowed into court for the first time in the trial. Files piled waist-high stood next to Joffe’s chair, indicating a lengthy judgement. The public gallery was the fullest it had been since the first day of the trial.

‘Lying witness’
While the defence claimed that Agliotti, the state’s main witness, was “untruthful” and obsessed with self-progress, the state accused Selebi of being a “lying witness”.

Thursday will show who and what Joffe believes to be true — if he thinks that Selebi accepted only a single payment from Agliotti, then he may find Selebi guilty. In one ear will be the voice of Cilliers, exclaiming: “Rather let a hundred guilty persons walk away than let one innocent person land in jail.” In the other will be Nel: “The accused’s version weighs nothing, because there is no version”.