South Americans have date with history 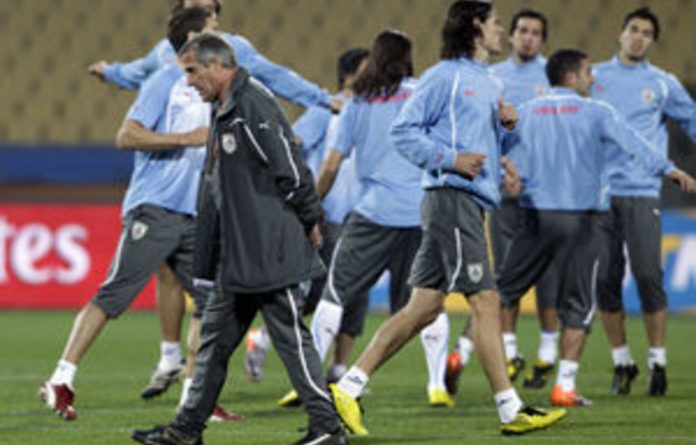 That makes the quarterfinals the place where that history takes shape and, in Africa’s first World Cup, it is South American teams that are doing the most to define the story of 2010.

The continent’s assault on the biggest prize in sport, broader-based than ever before, reaches its rubicon on Friday, when Brazil and Uruguay attempt to book the first two semifinals places up for grabs.

Argentina and Paraguay could join them in crossing over into the last four on Saturday in what would represent an unprecedented clean sweep for the continent of Pele and Maradona.

Assault on the Cup
With European champions Spain standing in the way of Paraguay, an all-South American line-up in the semis remains a long shot.

But a prediction that Brazil, Uruguay and Argentina will all come through their quarterfinals against, respectively, the Netherlands, Ghana and Germany, does not feel like it comes from too far out in left field.

Even three out of four would represent uncharted territory for South America but Uruguay will be acutely aware that a place in the history books is also beckoning Ghana, who can become the first African side to reach a semifinal if they can break down a defence that has conceded only one goal so far.

Ghana’s coach, Milovan Rajevac, admits the Uruguayans represent a significant raising of the bar the Black Stars must clear, but the affable Serb insists carrying the hopes of an entire continent will not burden his side.

“Uruguay have a great tradition and players playing in the best leagues in Europe,” he said. “They deserve every respect.

“But we will not change our style and we won’t worry about any so-called pressure. We’re not under any obligation to make history but that doesn’t mean we don’t want to.”

Theories vary as to why the South American challenge has been so vibrant after four decades in which their hopes were almost exclusively carried on the shoulders of Argentina and Brazil.

Tough qualifying path
The tough, team-building nature of their qualifying competition, a ten-nation round-robin which requires them to play 18 matches, may be a factor.

Likewise the familiarity with altitude that comes with qualifiers in Bolivia, Ecuador and Peru.

Another issue is whether modern football, with its accent on rigorous defensive organisation, places a greater premium on individual moments of genius — a Lionel Messi dribble, a Kaka flick — to unlock well-organised opponents and transform the pattern of matches.

With the decline of street football in Europe, those kind of players, it is argued, are now more likely to come from the scruffy suburbs of Buenos Aires or Sao Paolo, their dexterity of foot and mind honed by countless kickabouts in restricted spaces.

Whatever the explanation, it is clear the South Americans have all arrived in South Africa in prime condition and Spain’s coach Vincente del Bosque admitted to being extremely wary of facing a Paraguay side that finished third — above Argentina — in the qualifying campaign.

The odds on Spain claiming their first World Cup crown have lengthened during their time in South Africa.

We enjoyed our football
But a potential final meeting with Brazil, who have done nothing to damage their pre-tournament favourites tag, looked like it might be on again as they returned to their beguiling best in the 1-0 second round win over neighbours Portugal.

“Basically, we enjoyed our football,” a delighted Del Bosque said, but he is not counting on a the joyful trend continuing without his side putting in another concentrated 90-minute shift at Ellis Park on Saturday.

“We know how difficult it is to be victorious,” he said. “We can’t take anything for granted.”

Neither will Argentina, despite displaying attacking form that suggests they will be too smart and too strong for a Germany side that, for all its verve, a little raw around the edges.

Memories of a penalty shoot-out defeat by the Germans at the same stage four years ago are still too fresh for that. — AFP