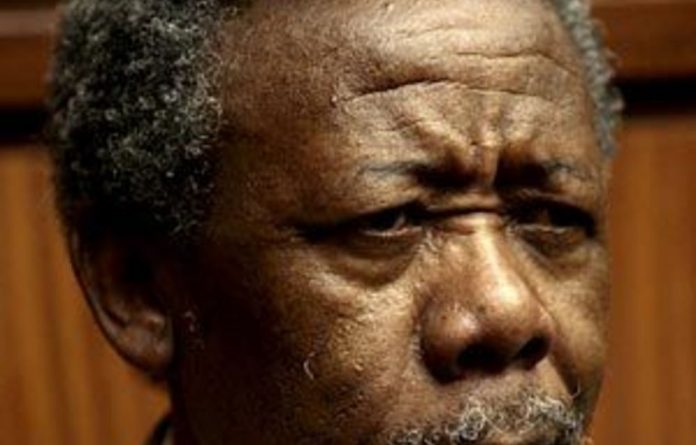 Jackie Selebi, the former head of the South African Police Service and Interpol president, was convicted on one count of corruption by Judge Meyer Joffe on Friday afternoon.

Asked for comment Selebi (60) said he had “nothing, absolutely nothing” to say as he left court with a small group of family and friends.

Selebi now faces the prospect of spending 15 years in prison as the crime of corruption carries a minimum sentence in South Africa.

In his judgement, Joffe rejected Selebi’s defence of a conspiracy against him by the Scorpions, and accepted the state’s argument that Selebi was corrupted by convicted drug-trafficker Glenn Agliotti.

In return for R1,2-million and clothes for him and his family, Selebi showed Agliotti top-secret reports and attended meetings with underworld characters whenever Agliotti wanted him to.

Joffe slammed Selebi in his judgement, encouraging other police officers not to “emulate” his behaviour.

“Every day society in general rely on the honesty and truthfulness of policemen and -women … It is not an example that must be emulated by members of the SAPS. A great deal of trust is placed on their integrity and credibility.”

While saying this, Selebi was shaking his head in the dock.

Joffe pointed out that Selebi’s counsel had not once tried to contradict state prosecutor Gerrie Nel’s accusations that Selebi told the “big five lies”.

He added that Selebi’s meeting with policeman Captain Marcus Tema while Tema was a state witness and the state’s case was still ongoing, showed a “lack of respect” for the trial.

The trial has been dramatic — Agliotti wept on the stand while talking about the pain he felt at testifying against his “friend” and Selebi was accused of creating “cut-and-paste documents” to show in court.

While the defence claimed that Agliotti was “untruthful” and obsessed with self-progress, the state accused Selebi of being a “lying witness”.

Selebi’s counsel, advocate Jaap Cilliers, claimed that Selebi was the victim of a “malicious prosecution” and maintained that Selebi never received a single payment from Agliotti. However, Muller said she witnessed money changing hands between Selebi and Agliotti in a brown paper bag.

Joffe spent Thursday recapping the vast amount of evidence presented to him by the defence and the prosecution in the high court in Johannesburg.

It began with newspaper reports that Selebi may face charges of corruption and defeating and obstructing the administration of justice for allegedly receiving money from Agliotti, from the account of slain mining boss Brett Kebble, in exchange for favours.

On Thursday Joffe accepted as evidence a copy of a recorded meeting between Agliotti and former spy boss Mulangi Mphego Mphego on January 7 2008 at the Villa Via Hotel in Sandton. At the meeting Agliotti slammed the Scorpions investigation of him and Selebi and alleged the Scorpions had conspired with the M&G to bring them down.

The video was produced by Selebi’s advocate, Jaap Cilliers, during cross-examination of Agliotti and entered as preliminary evidence. But Joffe found on Thursday that, even though it might have been obtained unconstitutionally, it was in the interests of justice for the video to be accepted as evidence.

Joffe proceeded with a lengthy analysis of all the undisputed evidence in the case, including large parts of Agliotti’s testimony.

Joffe also emphasised each of the meetings former NPA boss Vusi Pikoli had with former president Thabo Mbeki and then justice minister Brigitte Mabandla to inform them about the Selebi investigation.

Mbeki suspended Pikoli in September 2007 after he obtained warrants of arrest and search against Selebi. At the time it was alleged Pikoli did not keep Mbeki and Mabandla abreast of the Selebi investigation, but this was refuted during the Ginwala Inquiry.

Joffe further ruled someone was trying to influence the proceedings of the Selebi trial by leaking a video to City Press containing another recorded meeting with Agliotti on January 4 2008. While the trial was running, an article appeared in the newspaper quoting Agliotti at a meeting he attended at the Balalaika Hotel in Sandton with Mphego and former National Intelligence Agency boss Manala Manzini.

Joffe described Agliotti as a “large man of imposing appearance” who is “relatively well-spoken” and “extremely well-dressed”. He said Agliotti “lacked no confidence” and that he “deliberately gave the court the impression he likes the better things in life”.

Joffe detailed the evidence of KPMG forensic auditor Dean Friedman about cheques drawn against the Spring Lights account. He focused on the absence of cash withdrawals from Selebi’s bank at the end of 2005 and beginning of 2006, shortly after Agliotti claimed he paid Selebi more than R300 000 in cash.