Ghana stand on the brink 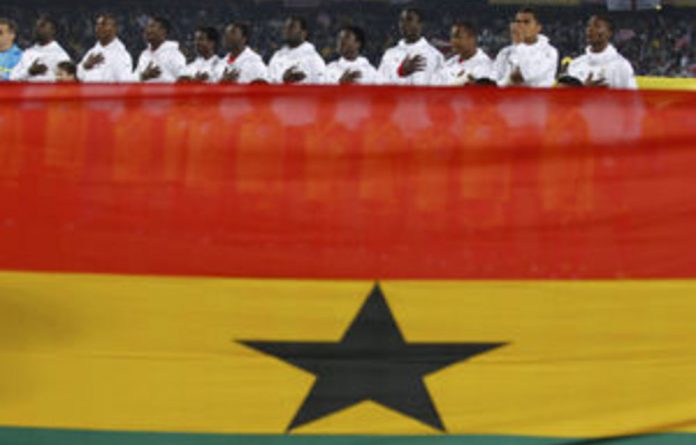 Ghana will not know whether several of their key players are available for their World Cup quarterfinal until just hours before the kick-off of the match against Uruguay.

The likes of Kevin-Prince Boateng, scorer of the opening goal in the dramatic second-round win over the United States, and fullback Hans Sarpei are racing against time to get ready for the game at Soccer City on Friday at 8.30pm. The pair have received intensive medical treatment for hamstring and calf problems, including work by a specialised physiotherapist from France who has travelled with the team.

Knocks to Asamoah Gyan and John Mensah also restricted their participation in this week’s build-up, but they are expected to take to the field.

Mensah is fast becoming the African Ledley King, able to train only sporadically to protect the legion of injuries he has suffered in the past few years as a result of a chronic back problem. He was known as the “Rock” in his playing prime but is much less solid these days.

Walking wounded
Gyan, whose brilliant finish against the Americans sent the Black Stars into the record books, has a swollen ankle but made it clear in this week’s build-up that he has no intention of missing out on another chance to increase his three-goal tally at the tournament.

Under normal circumstances Ghana’s walking wounded would provoke a crisis of confidence but for the Black Stars it has become de rigueur.

They went to the Africa Cup of Nations finals at the start of the year with nine regulars missing, a result of injury and suspension, and yet surprised to progress to the final, in which they lost narrowly to Egypt.

The talismanic figure of Michael Essien has been missing from this World Cup, his participation ruled out weeks before the start of the tournament, and yet the side have managed to match the best-ever previous performance by an African team at the Cup.

Now they stand on the brink of a new milestone for the continent’s game, facing as good a chance of a semifinal place as their South American opponents.

Steady leadership
Coach Milovan Rajevac has a stoic approach, evidenced by a shrug of the shoulders when questioned about the injury crisis and a refusal to use it as currency to explain away poor performances. Not that there have been many.

As with many foreign technocrats who arrive without reputation in Africa, he received an unenthusiastic, and somewhat suspicious, welcome when he first took the Ghana job. Now he will be a hero when the squad returns home, irrespective of what happens at Soccer City.

Rajevac has organised his side well, kept a firm hand on the squad and encouraged talent.

He won his showdown with tempestuous Sulley Muntari who, after Essien, is the star of the squad and just one month ago was a member of Inter Milan’s victorious Uefa Champions League-winning side.

Muntari has a penchant for testing authority and has a record of past run-ins with authority.

Rajevac left him out of the Nations Cup then seemingly patched things up in March — only for Muntari to fall foul of the coach again in the World Cup build-up when he left the training camp to seek private medical treatment.

Muntari has been used only as a substitute at this World Cup, a gamble of sorts, but one that has so far worked.

Dede Ayew has been brilliant out wide where Muntari might have played and Boateng, newly naturalised, is a strong addition to the midfield options.

Muntari could well get a quarterfinal start but there is also the option of playing Dominic Adiyiah, the best player at last year’s World Youth Championships, and Prince Tagoe, who plays in the Bundesliga.

There will be one change, with Jonathan Mensah out of the team. The former Free State Stars centre back is suspended, like Ayew, after an accumulation of cards. Isaac Vorsah, the unsung hero of Ghana’s performance at the Cup of Nations, will return to his place in the back four after missing the past two matches through injury.

Expansive football
Vorsah’s return is timely because in Luis Suárez and Diego Forlán Uruguay possess a formidable attacking duo. They have already taken their small country past pre-tournament expectations.

They play a much more expansive brand of football than Ghana, which is ironic, really, given the old stereotypes about Latin American and African football.

Rajevac has looked this week to deflect the numerous questions about Ghana being flag-bearers for an otherwise disappointing African World Cup. He is perhaps worried that this burden of responsibility will sit too heavily on the shoulders of his players but, in speaking to the Ghanaian players this week, it seems to be a comfortable fit.

They make all the right noises about playing on behalf of the continent, making Africa proud and such things, but it is their own professional pride that will ultimately drive any possible progress to the final four.