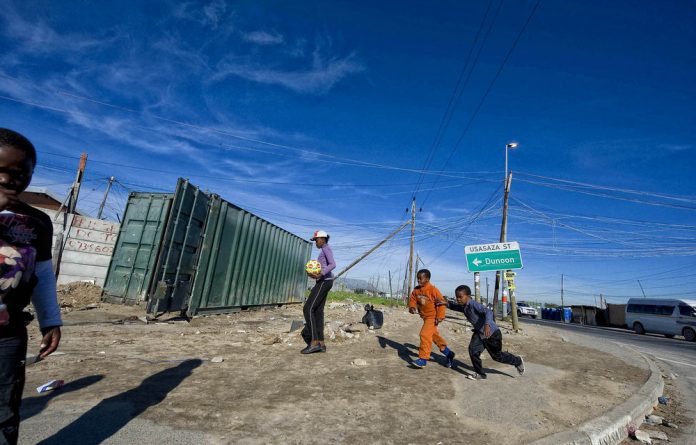 Some in Cape Town needed only the exit of Bafana Bafana from the tournament last week Tuesday to begin the xenophobic hatred fearfully rumoured as a threat once the World Cup ends next weekend.

And as police in Casspirs moved this week into another xenophobic hotspot — Dunoon in the Western Cape — it became clear the hatred could spread far and wide.

In Makhaza, Khayelitsha, residents had rallied around Somalian nationals and tried to protect them when thugs wearing Bafana Bafana jerseys and blowing vuvuzelas attacked spaza shops after the host team’s exit from the tournament.

Somalian shopkeeper Daud Muhuddin told the Mail & Guardian: “[The locals] really helped us a lot. Some even stood outside the shop until we closed at night to make sure we were safe.”

But this week’s xenophobic eruptions in Dunoon put paid to the hope Muhuddin shared with the M&G that the welcome sight of South Africans standing up for Somalians in Khayelitsha would bode well for a similar spirit after the World Cup.

Zimbabwean national Frank Abibo, who moved to South Africa two years ago, was one of those told to leave the country before the World Cup ended.

“A group of guys came to the room I was sharing with my brother and told us to leave South Africa or we would be killed like in 2008.”

He said his younger brother — who has been living in South Africa for more than three years — witnessed the 2008 xenophobic attacks and advised him to pack up his belongings and leave the area.

Dunoon was a centre of violence when the first wave of xenophobic attacks broke out in 2008, leaving more than 60 people dead and displacing hundreds.

By Thursday one of the three Casspirs deployed there on Tuesday remained.

Liat Davis of the Social Justice Coalition, a human rights organisation in Khayelitsha, said there appears to be community resistance to xenophobic hatred that was not apparent in the 2008 attacks. “I hope these communities will rally around these people because they come from difficult circumstances and need to be recognised as equal members of society,” she said.

Nomathemba Mdudu (45) lives opposite a Somalian-owned shop in Khayelitsha and was one of the first people to assist the Somalians. “I was standing in front of the shop when the police arrived and I told them of the attack,” she said in her testimony last week to the Social Justice Coalition.

Another resident, Phumeza Yaso, said she doesn’t understand the logic of people who are trying to chase away foreigners from this country because “they uplift our black communities by creating jobs for us”.

“I never had a job before they [Somalians] came to South Africa. It’s all thanks to them that I can afford to feed my family,” said Yaso. “These people work extremely hard for their livelihood and they are not stealing anything from anyone. People are just being jealous and lazy,” she said.

Not yet uhuru in the Richtersveld