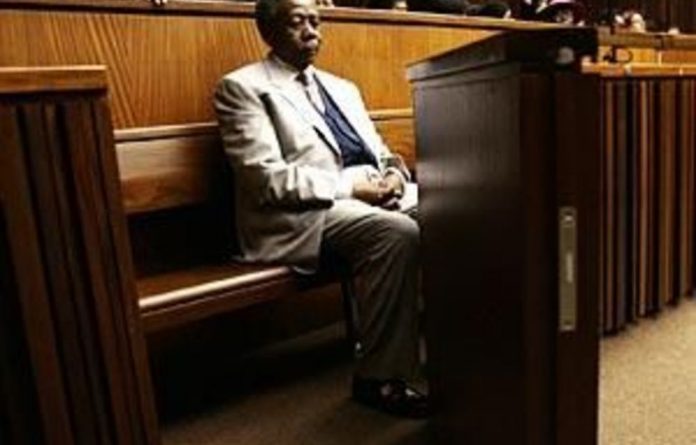 The end appears to be nigh for former police National Commissioner Jackie Selebi. Judge Meyer Joffe continued handing down his verdict in the marathon trial on Friday morning, in which Selebi is charged with corruption and defeating the ends of justice.

So far, Joffe has already accepted the state has proved beyond a reasonable doubt that Selebi accepted payments of R110 000 and R30 000 from convicted drug trafficker Glenn Agliotti.

He also accepted that Selebi showed Agliotti both a portion of a National Intelligence Estimate report and a confidential report from the United Kingdom in order to benefit Agliotti.

Joffe lashed out at Selebi’s unreliable conduct as a witness. “It is never pleasant to make an adverse credibility finding against a witness,” said Joffe. “It stigmatises the witness as a liar, a person of low moral fibre. It is a stigma that remains forever. It is so much more unpleasant to make such a finding against the person at the head of SAPS. Every person relies on honesty of policemen and women. He has not set an example that must be emulated.”

Joffe pointed out that Selebi’s counsel had not once tried to contradict state prosecutor Gerrie Nel’s accusations that Selebi told the “big five lies”.

He added that Selebi’s meeting with policeman Captain Marcus Tema while Tema was a state witness and the state’s case was still ongoing, showed a “lack of respect” for the trial.

He praised Agliotti’s former fiancée Dianne Muller’s conduct as a witness. He pointed out the defence did not call upon Selebi’s wife and two sons to explain the allegations made by Muller that Agliotti had bought clothing for Selebi’s sons from Fubu, and a Gucci bag for his wife.

The state claimed that Selebi took more than R1,2-million from Agliotti, and received expensive gifts of clothing, in what was a “generally corrupt relationship”. Selebi is also accused of defeating the ends of justice by showing Agliotti secret police reports.

The trial has been dramatic — Agliotti wept on the stand while talking about the pain he felt at testifying against his “friend” and Selebi was accused of creating “cut-and-paste documents” to show in court.

While the defence claimed that Agliotti, the state’s main witness, was “untruthful” and obsessed with self-progress, the state accused Selebi of being a “lying witness”.

Selebi’s counsel, advocate Jaap Cilliers, claimed that Selebi was the victim of a “malicious prosecution” and maintains that Selebi never received a single payment from Agliotti.

However, Muller says she witnessed money changing hands between Selebi and Agliotti in a brown paper bag.