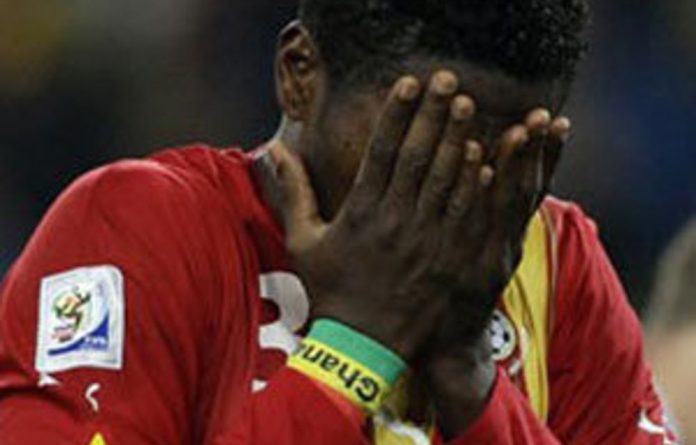 Africa’s last hope in the Soccer World Cup ended in heartbreak after Uruguay eliminated a youthful Ghana 4-2 in a dramatic quarterfinal penalty shoot-out at Soccer City on Friday evening. The teams had been deadlocked 1-1 after 120 minutes.

Inter Milan bad boy Sulley Muntari gave Ghana the lead with a 30-yard drive in the first half but Uruguay skipper Diego Forlan equalised with a stunning free kick five minutes into the second half.

However it was a combination of the deteriorating standard of football that cheating, raw nerves and bad luck conspired to deny the West Africans victory. Gallant Ghana lost the dreaded penalty lottery after missing two of their spot kicks in a pulsating finale to the bruising encounter.

It was a heavy price to pay for failing to wrap up the match when presented with a glorious opportunity in what would have been the last kick of the game. Ghana failed to convert a penalty after Uruguay striker Luis Suarez spectacularly punched away Dominic Adiyiah’s effort from the line in extra time. In rugby, this would have been a clear case of a penalty try but then again this is football where cheats appear to be rewarded as heroes.

Robbed
Suarez’s blatant cheating joined the all time list of memorable hand-ball misdemeanours that have not done the image of the game any favours. While Diego Maradona and Thierry Henry may have got away scot free for their hand-assisted goals, the 84 000-strong crowd and indeed the rest of Africa watching on television felt robbed, in spite of Suarez being sent off.

Being the last minute of extra time, the only advantage to Ghana was that the referee spotted the incident, expelled Suarez and gave the Black Stars a penalty. Up stepped Asmoah Gyan, who had scored two previous penalties in this tournament. Needing to take all the time in the world, Gyan was perhaps overawed by the weight of the moment. He rushed to get the job done and made a mess of things as his effort bounced off the top crossbar.

The miss put paid to the hopes of an entire continent keen to see Ghana become the first African nation to progress to the World Cup semifinals. However they have to be content with joining Cameroon and Senegal in going only as far as the quarterfinals. Significantly, Gyan’s miss gave the South Americans the advantage going into the penalty shoot-outs. As a result, only Andres Scotti failed to convert as Uruguay reached their first semis in 40 years while Ghana captain John Mensah and Adiyiah had their tame efforts saved.

Football diplomacy
A militant media made their feelings known to the two coaches — who both maintained a diplomatic stance — at the post-match press conference.

Dejected Ghana coach Milovan Rajevac repeatedly used the phrase “that’s football” — even when pushed about the injustice of Saurez’s hand-ball.

Rajevac, who has earned plaudits for his work with the Black Stars, would not be drawn into criticising Saurez.

“I don’t know how to answer that,” he said when asked what he would say to Saurez. “I’m very proud. We managed to achieve a great result and the whole of Africa supported us. We didn’t deserve to lose in such a way and it’s difficult to talk about it at the moment. We had bad luck … that’s all I can say.”

Rajevac pointed out that Uruguay “had the psychological advantage in the shoot-out”.

But after their second game of extra time, the players were exhausted. “This is a very difficult game because the previous one we played was for 120 minutes as well,” said Rajevac.

Uruguay coach Oscar Tabarez was honest about his team’s performance, saying several times that they had not performed at their best.

“Yes, we were not playing brilliantly,” Tabarez said without being prompted “But like Uruguayans say: ‘You do what you have to do’.”

On Saurez, Tabarez said: “The player instinctively stopped the ball,” pointing out that he would miss the next game.

“Is Saurez also to blame for Gyan missing the goal in the penalty?” he replied to a journalist.

“I think saying the word that we cheated Ghana out of victory is too harsh a word.

He spent some time praising the African team after it was pointed out that the hopes of a continent had been scuppered. The Uruguayan native said he was familiar with the country and impressed with their grassroots work in rearing young players. “

Tough opponents
“They played hard — especially at the end.”

“It doesn’t matter the history or the names of the players. Once you’re on the pitch there’s no name. You just have to play.”

“We really had big support and it would have been a fairytale if it ended well for us, but I would like to congratulate Uruguay on reaching the semifinals,” said Rajevac.

There were some journalists that felt Ghana had not prepared for penalties — a suggestion dismissed by Fulham defender John Pantsil.

“That is not true. We did practise penalties because at knockout stages anything can happen,” said Pantsil.

He also defended Gyan. “Asmoah has played in this tournament with a lot of heart and really wanted to score but it was not to be. We have told him its not his fault.”

Gyan appeared to have handled the disappointment relatively well. “That is football. Today, I know Suarez is a hero in Uruguay while I missed the penalty,” said the Rennes and Ghana striker.

Uruguay now face The Netherlands for a place in the final.