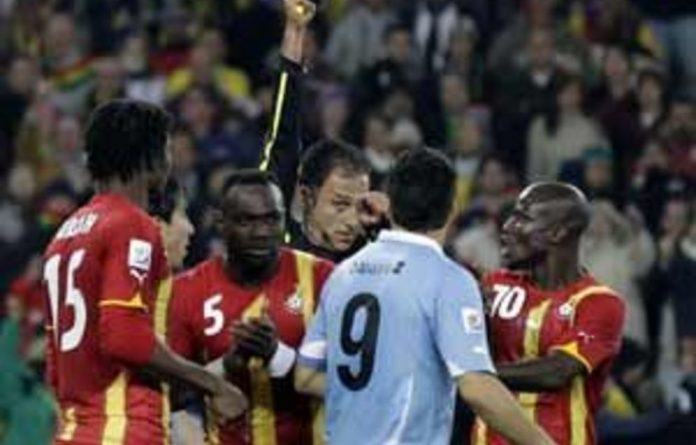 Uruguay coach Oscar Tabarez got visibly angry when asked on Monday whether his side deserved to be in the World Cup semifinals.

The slant from the inquisitor was that the handball from Luis Suárez in the last minute of the quarterfinal against Ghana was blatant cheating and Uruguay’s progress into the final four had been contrary to all principles of sport.

If you are an aggrieved Ghanaian fan, or even just a sympathiser, you’d applaud the question.

But it certainly got the Uruguay coach all rattled as he addressed the media on the eve of the semifinal against The Netherlands in Cape Town.

His answer was unconvincing. Indeed, how it could be anything but. He made reference to the fact Uruguay had suffered the same fate in a previous World Cup although you’d be hard pressed to be able to pin-point the incident.

He also made the point, and this time with a little more credence, that Ghana had been awarded a penalty and Suárez sent off, but the fact the Uruguay went on to win the game still sits uncomfortably with the most.

The chaotic end to Friday’s game at Soccer City will go down in the legend of the tournament — both the handball on the line, almost a volleyball-style scoop to stop the ball entering the goal, and then the fact that Asamoah Gyan missed the kick.

A Ghana-Holland semifinal would have had the Mother City buzzing, although the orange-clad Dutch supporters are still doing their best to ensure a carnival atmosphere ahead of the game.

Soccer journalist Mark Gleeson speaks to the M&G about the upcoming semi-finals. Will there be more surprises to come?

There should be very little sympathy for the South Americans at the Cape Town Stadium on Tuesday night; indeed, there is likely to be plenty of derision for the locals when they come out to take to the field.

For all the arguments about technology and the instant justice it can provide, the drama of Friday night’s game at Soccer City ensures that football stays top of the agenda.

Maybe that is why Fifa so reluctant to go down the path that rugby, cricket and tennis have taken with video referral. It will make the game fairer but it will also rob us of the controversy that makes football so infectious.

The video-sanitised sports have lost that. But controversy is a fuel still much needed in sport.