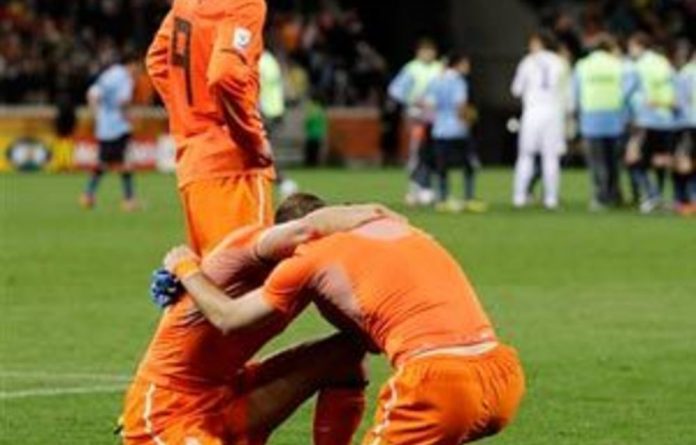 Dutch football fans scrambled on Wednesday for pricey, last-minute tickets to South Africa as the country went football crazy after reaching the World Cup final for the first time in 32 years.

Orange flags took over city streets after the national team’s 3-2 win over Uruguay in the semifinal. Some people covered their homes with plastic sheets in the national colour, others wore orange or put it on their cars and bicycles.

“It is typically Dutch: once the orange craze erupts everyone wants to be part of it!” Dick Gussen of the Corendon travel agency said ahead of Sunday’s final at Soccer City in Johannesburg.

Corendon chartered two extra Boeing 747s to fly about 1 000 supporters to Johannesburg on Saturday night, at a package price of €2 000 per person.

This provides a night flight and bus transport to fan parks on Sunday, and then a ride to the stadium for the evening match, and a flight back home that night.

“They will be in transit for 48 hours,” said Gussen, adding that most of the group already had stadium tickets or were in the process of obtaining them.

Those without tickets would follow the match on big screens around Johannesburg.

“This is a once-in-a-lifetime happening,” the spokesperson said. “People just want to be part of it.”

The whole nation wants to be part of the football fever, though, after the tense semifinal win on Tuesday night. Arrangements were made for giant-screen gatherings across The Netherlands on Sunday.

‘Quite surprising’
But thousands of fans jammed the lines of travel companies to see if there was any way to be in South Africa for the final.

He said Oad had about 8 000 people wanting to travel on standby but only about 1 000 would be successful.

“As soon as we get an indication from Fifa as to how many extra tickets we will get and have paired those with flights, transfers and hotels, we will alert all these people by email,” said Gramsma.

“I find it quite surprising that so many people are willing to travel so far, for so much money, at such short notice,” he added.

Simone van den Berk of the TUI travel company said it had about 5 000 people on standby for a last-minute flight to South Africa.

“We are dependent on extra match tickets from Fifa and extra seats from airliners. So far, we managed to arrange one extra flight that left for Johannesburg this morning with 272 people on board.”

Van den Berk said demand has grown sharply as The Netherlands has progressed through the tournament “and peaked once it became certain they will be in the final”.

“Yes, it is far and expensive and a lot has been written about security concerns, but it is a World Cup and we are in the finals! People want to share in the experience.”

Dutch airline KLM said it had scheduled three extra flights that will take about 1 000 people from Amsterdam to South Africa on Saturday night.

“We would love to do more, but the authorities can only give permission for a certain number of flights. I am afraid we will have to disappoint some people,” said spokesperson Ellen van Ginkel. — AFP