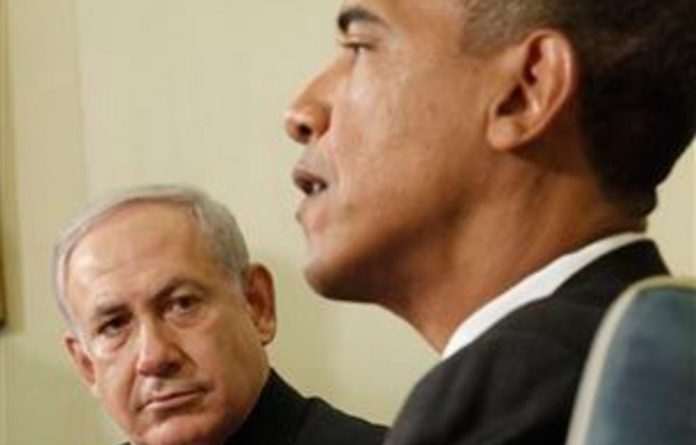 After a meeting considered as important for symbolism as for substance, Obama and Netanyahu appeared side by side seeking to project an image of unity after ties reached a low point in March over Israeli settlement expansion.

They agreed on the need to resume face-to-face peace talks and on their concern about Iran’s nuclear programme, while avoiding past differences over US-led peace efforts.

“We expect proximity talks to lead to direct talks,” Obama told reporters after a 90-minute session with Netanyahu.

Offering his first suggestion of a timetable to step up Middle East negotiations, Obama said he hoped direct discussions would get going “well before” a 10-month Israeli moratorium on new housing construction in West Bank settlements expires in September.

Meeting this timeframe will likely require serious US arm twisting on both sides.

Netanyahu again called on Palestinian President Mahmoud Abbas to meet him one-on-one and move from the current US-mediated “proximity talks” to direct negotiations on Palestinian statehood.

While there have been few signs the sides have narrowed the gap on longstanding disputes, Netanyahu promised “concrete steps that could be done now — in the coming days, in the coming weeks — to move the peace process further along in a very robust way”. He gave no specifics.

Palestinian leaders say the slow-moving indirect talks have not progressed enough to justify a return to direct negotiations suspended since late 2008. They also remain wary of Israeli construction plans in East Jerusalem.

Responding cautiously after the Obama-Netanyahu meeting, Palestinian officials said they were awaiting details of the concrete measures Netanyahu was pledging.

Obama said he hoped mutual confidence-building measures would help ease the way to such negotiations.

A big question hanging over the fragile peace process is whether Netanyahu will extend the settlement expansion moratorium, which he accepted only under pressure from Obama.

Its extension could widen cracks in Netanyahu’s governing coalition, dominated by pro-settler parties, including his own. Failure to do so would anger Palestinians.

Warmer welcome
It was a warmer White House welcome for Netanyahu than during his previous visit in March.

As journalists filed into the Oval Office, the two leaders sat side-by-side, leaning toward each other, chatting and smiling. They shook hands vigorously as camera shutters clicked and they later lunched together.

In what was widely viewed as a snub at the March meeting, there was no photo session and no meal for Netanyahu. The US was angry that Israel announced plans to build 1 600 more homes for Jews in Israeli-annexed East Jerusalem while Vice-President Joe Biden was visiting their country.

That chill has thawed recently, with Obama shifting to a gentler tone and Netanyahu offering conciliatory gestures, including easing Israel’s Gaza blockade after a deadly raid on an aid flotilla on May 31.

Seeking to show they have turned the page, Obama and Netanyahu rejected talk of a rift between their governments.

Both face domestic pressures and need to downplay their differences.

Obama is unlikely to risk another diplomatic clash with Netanyahu with pivotal US congressional elections looming in November and pro-Israel sentiment strong among American lawmakers and voters.

He publicly assured Netanyahu of his commitment to what he called Israel’s “unique security requirements”.

The Obama administration sparked concern in Israel in May by yielding to Arab demands at a UN conference on the Nuclear Non-Proliferation Treaty that the final document urge Israel to sign the treaty.

Israel is believed to have the Middle East’s only nuclear weapons but refuses to confirm or deny possessing any.

Back on track
The main focus of the talks appeared to be the Middle East peace process, central to Obama’s agenda for repairing UN relations with the Muslim world.

He praised Israel for showing restraint in recent months “conducive to the prospects of us getting into direct talks”.

But he sidestepped a question about whether he had pressed Netanyahu to extend the settlement housing moratorium to ease the way toward face-to-face negotiations and instead suggested a way around the thorny issue.

“My hope is that once direct talks have begun, well before the moratorium has expired, that that will create a climate in which everybody feels a greater investment in success,” Obama said.

For his part, Netanyahu was keen to show the Israeli public that relations with their superpower ally were back on track. But he was also seen as reluctant to offer major concessions that would anger pro-settler parties in his fragile coalition. — Reuters