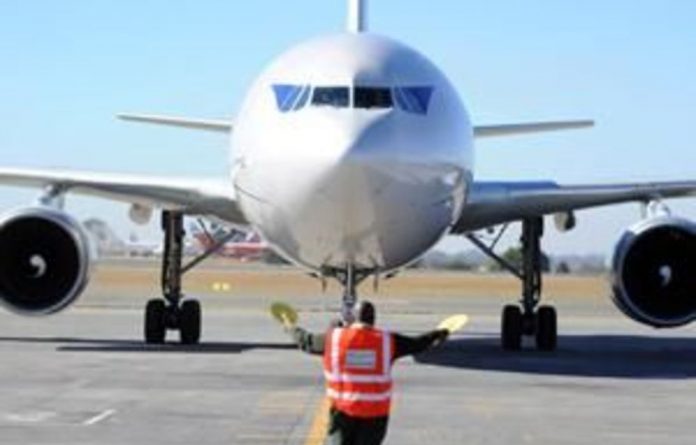 The government has apologised to soccer fans who missed the World Cup semifinal between Spain and Germany on Wednesday because of aircraft parking chaos at the King Shaka International Airport.

“As government, we regret the inconvenience caused to all those fans … ,” Transport Minister Sibusiso Ndebele said in a statement on Thursday.

The Airports Company South Africa (Acsa), Air Traffic and Navigation Services (ATNS), and the rest of the aviation sector would continue to work together and would strengthen their private aircraft operator facilitation plans for the remainder of the World Cup.

“Transport has generally been moving smoothly since the start of the Fifa World Cup,” he said. “It’s now all systems go for the closing ceremony and the final match of the 2010 Fifa World Cup at Soccer City in Johannesburg on Sunday.”

Acsa said on Thursday that private aircraft would be towed out of the way if their pilots refused to move them at OR Tambo International Airport during the final World Cup game.

“We are going to be more forceful on Sunday. If aircraft refuse to move we will tow them away,” said Acsa operations manager Bongani Maseko.

“The procedure was going very well throughout the day … It was only late when aircraft refused to reposition,” Maseko said.

He said that on a normal day, about 100 aircraft flew in to King Shaka airport. On Wednesday, there were about 250.

Delayed
On Wednesday night, five plane-loads of football fans were delayed before the game between Germany and Spain, causing fans to miss the match. Four of the planes were from Johannesburg and one was from Cape Town.

“I am not blaming the VIPs. The people who caused the problem were the people flying the aircraft,” said Maseko.

He said the pilots had started moving their aircraft when Acsa threatened to take action against them, but by then it was too late.

The situation at the airport had normalised by Thursday.

On Sunday, Spain play The Netherlands in the World Cup final at Soccer City.

Maseko said that in Johannesburg there were would not be a repeat of the problem in Durban.

The Rea Vaya bus-rapid transit system and Metrorail would begin operating to the stadium from 2pm.

Ndebele said traffic flow problems to the stadium in Johannesburg had largely been caused by locals using private vehicles instead of public transport.

Call for probe
Meanwhile, Comair on Thursday demanded an independent investigation into incident.

“Comair will be sending a letter of complaint to the department of transport demanding a full independent investigation into the matter,” said Comair, which operates British Airways in South
Africa and Kulula.com, in a statement.

Prior to the World Cup, Acsa and ATNS had meetings about potential glitches such as an increased air traffic and aircraft parking problems.

“The airlines urged them [Acsa and ATNS] to have contingency plans in place, such as keeping the old Durban International Airport in operation. It is now evident that these recommendations were never taken into account,” Comair CEO Gidon Novick said.

Novick said ATNS and Acsa needed to be held accountable.

“Their behaviour goes against our service agreements and we will be pursuing damages claims against Acsa and ATNS to recover the
costs incurred as a result of their actions.”

Fifa washes hands
Fifa and the local organising committee on
Thursday washed their hands of the chaos.

LOC chairperson Irvin Khoza said the body was not taking responsibility for the congestion at the airport.

Fifa secretary general Jerome Valcke told a press briefing in Sandton, Johannesburg: “I want to make it clear that this problem had nothing to do with Fifa.”

Khoza told journalists: “The problems that occurred were not down to the OC [organising committee]. It was not our fault. We are sorry it happened but we cannot be held responsible for aircraft not landing in Durban.”

Khoza blamed a “knock-on effect” for flights having to be sent back to Johannesburg’s OR Tambo.

“Apparently there were heads of state and charter flights in the air at that time and we had a corridor of 50 minutes that had a knock-on effect that caused the problem.”

Valcke stressed the organisation would not pay any compensation to fans for abandoned flights and match tickets. – Sapa