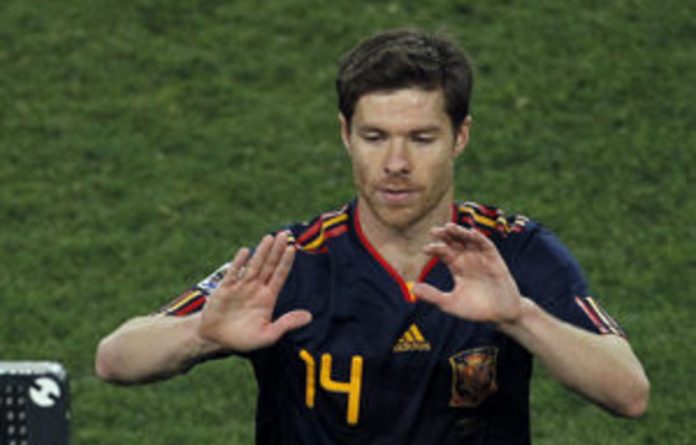 Spain midfielder Xabi Alonso said the European champions are coping with the pressure of being favourites after reaching the World Cup final.

Spain beat Germany 1-0 in the semifinals on Wednesday to reach their first ever World Cup final, where the Netherlands await them.

And while Spain have not been spectacular in their progress, they have been ruthlessly efficient since suffering a shock 1-0 reverse against Switzerland in their opening group match of the tournament.

“We have been coping with the pressure quite well,” said Alonso. “We knew the pressure would be quite high, but the favourite thing means nothing, you have to show that on the pitch.

“But we’ve been playing well and now we’re in the final against Holland.”

Controlling proceedings
Wednesday’s semifinal was anything but a classic with a headed goal from centre-back Carles Puyol from a Xavi corner proving decisive.

But although the match was short on excitement, Spain did manage to control proceedings with their smooth-passing game.

“It was the performance we needed,” added Alonso. “We have seen that when Germany get ahead in the scoreline they play on the counter attack and score many goals so we were really concerned about that.

“We tried to keep a good balance between attack and defence, we controlled the game and although it took a little bit longer than expected to score the first goal we’re really pleased and delighted to play the final.”

Alonso also praised the team’s maturity in managing to impose their system on every opponent despite not scoring many goals.

“It’s our style, it’s the way we know how to play and the results have been good because we stick with that idea.

“We’re happy with our performance, it was really mature and what we needed in the semifinal of the World Cup.”

Barcelona playmaker Xavi said Spain got what they deserved but warned that the Dutch will be a tougher proposition in the final.

“I’m delighted because we deserved to win and be in the final,” he said. “We dominated the match and managed to impose our game, especially in the second half when Germany hardly touched the ball.

“We felt comfortable on the pitch, that’s what we wanted from the match.

“Holland are a great team with good attacking and creative players but if we play like we did (agianst Germany) then we’ve got a good chance.”

Real Madrid right-back Sergio Ramos said he was surprised by just how well the Spanish were playing.

“I’m happy with how I’m playing but I’m lucky to be playing for such a team. “We play with a system that allows me to get forward and I benefit from that, it seems more as if I’m a winger than a full-back.”

Star striker David Villa has his eye on more than one prize as he also leads the top-scorers charts.

“I hope I can finish top scorer but right now the only thing I want is to help my team become world champions,” he said.

“If we manage that and we also win an individual title it will be a collective achievement, it wouldn’t just be for me but for the whole team.” — AFP