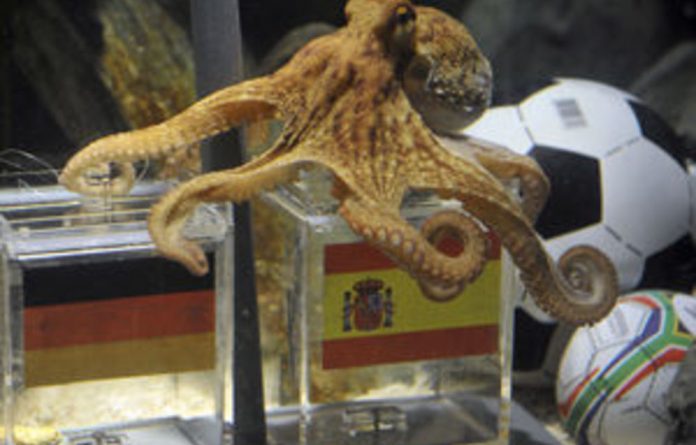 “Psychic” octopus Paul predicted Spain’s victory over Germany which saw the Iberians through to the World Cup final.

Spain’s victory over Germany in the World Cup last night will come as no surprise to those following one of the competition’s most successful pundits — for the result had already been foretold by Paul the Octopus, a creature that has achieved celebrity status with the accuracy of its predictions.

Dubbed the psychic octopus, the English-born Paul (hatched at the Sea Life Park in Weymouth) has correctly predicted all of Germany’s World Cup results including the 1-0 defeat on Wednesday night. He predicted Germany’s wins against England and Argentina, and even Serbia’s defeat of Germany in the group stage.

Such is the popularity of his selections that, on the eve of Wednesday’s game, the German news channel n-tv broadcast Paul’s prediction live.

Paul’s handlers at Aquarium Sea Life in the western city of Oberhausen have turned him into a betting phenomenon by putting mussels into two glass boxes, with one box having Germany’s flag while the other carries the flag of their opponents. Paul is then left to choose one box to open to retrieve the mussel.

Sure bet
On Tuesday night, he at first crept towards the container bearing the Spanish flag before moving around the tank and hovering over the German cube. But the two-year-old cephalopod eventually returned to his first choice.

Not everyone is a fan of Paul, however. After Argentina lost to Germany in the quarterfinal, Argentines threatened to kill the octopus and put him in a paella. The newspaper El Dia even gave a recipe for anyone daring to capture Paul: “All you need is four normal potatoes, olive oil for taste and a little pepper.”

Bookmaker William Hill is so impressed by Paul’s predictive powers that it was offering even odds that he will pick the winner of the final on Sunday, between Spain and The Netherlands.

“Punters are keen to keep on the right side of Paul’s tips, so we are giving them the chance to bet that he’ll pick the winner before they even know which side he has opted for,” said William Hill’s spokesperson Graham Sharpe.

At least one punter was kicking himself for not paying attention to Paul. A man who staked a record €500 000 on Germany winning last night lost his wager — the largest World Cup bet ever, according to William Hill.

Learning from his mistakes
Paul has erred in his predictions, although not often. His most famous mistake was when he wrongly picked Germany over Spain in the 2008 European Championship. Spain won 1-0. So at least he learns from his mistakes. — Guardian News and Media 2010

The richest 10% of South Africans own over 85% of all private wealth and a once-off 25% tax would reduce government debt by more than half. Imagine what a five-year wealth tax could do
Read more
Politics