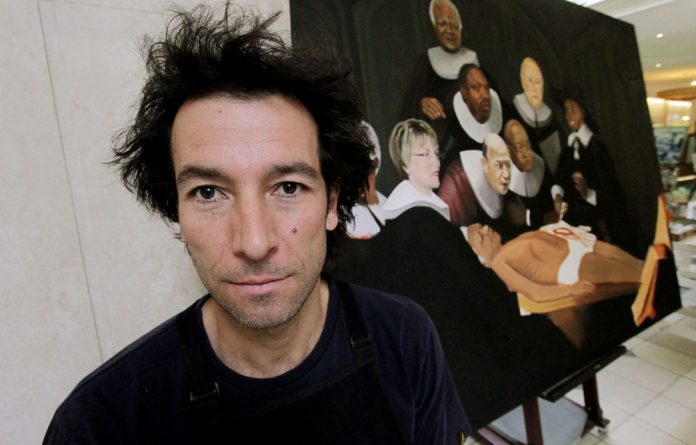 A painting on the cover of the Mail & Guardian depicting former president Nelson Mandela as a corpse undergoing an autopsy is an insult to South Africans, the African National Congress (ANC) said on Friday.

“It is in bad taste, disrespectful and it is an insult and an affront to values of our society.”

The painting, which is on display in the Orpheo Twins store in Hyde Park shopping centre, is a modern take of a 17th century Rembrandt canvas called The Anatomy Lesson of Dr Nicolaes Tulp, which depicts doctors watching an autopsy.

Mthembu said the front-page use of the picture had strengthened the ruling party’s resolve to establish a media tribunal, a proposal which has been strongly criticised by the opposition.

“We strongly condemn the practice and promotion of the freedom of expression and freedom of the arts which knows no bounds and only sees itself as the most supreme freedom that supersedes and tramples other people’s constitutional rights to dignity and privacy, and undermines our values,” Mthembu said.

“We therefore remain resolute and unmoved in our call for an independent arbiter in the form of a media appeals tribunal to monitor, regulate and chastise the kind of gutter, soulless and disrespectful journalism of Mail & Guardian.”

Mthembu said the fact that a story about the painting only appeared on page ten showed that it was of little news value.

“It is [the] kind of gutter journalism and soulless sensationalism which knows no limit and will exploit anything to increase its bottom line,” he said.

“It goes further by violating Tat’ uMandela’s dignity by stripping him naked in the glare of curious onlookers some of whom have seen their apartheid ideals die before them,” he said.

“Mandela is our international icon, respected and celebrated the world over as the source of wisdom and the humanity well from which to drink. He is a man whose ideals would live forever and whom we should cherish and respect and forever hold dear.”

“That is why we are more shocked and disgusted [by] this so called art that depicts a dead Madiba,” Mthembu said.

Cosatu called for it to be removed from public view.

The painting was “deeply offensive” to all South Africans and caused distressed to Mandela’s family and his admirers across the globe.

Several people called the Hyde Park shopping centre this week to complain about Damaso’s work, including a woman who claimed to be close to the Mandela family and chastised him for upsetting the family while it grieves the death of Mandela’s great-granddaughter Zenani last month.

“The person on the phone told me that she was a friend of one of Mandela’s daughters and that the daughter was very upset about the painting,” Damaso said.

“I was told that they had recently had a death in the family and that they are still very bereaved.”

The mall’s marketing manager Nicola van Kan told the M&G: “We feel it is a controversial piece… but we support freedom of expression and art.

“He explained the piece and we were happy with that.”

Damaso told the M&G: “The eventual passing of Mr Mandela is something that we will have to face, as individuals, as a nation.”

In 2000 Damaso produced a series of paintings depicting Mandela, who turns 92 next week, with dreadlocks and wearing boxing gloves.

He said the Nelson Mandela Foundation complained about these.

“They told me that his image was copyrighted. But how can you copyright the image of a public figure,” Damaso told the newspaper. –Sapa