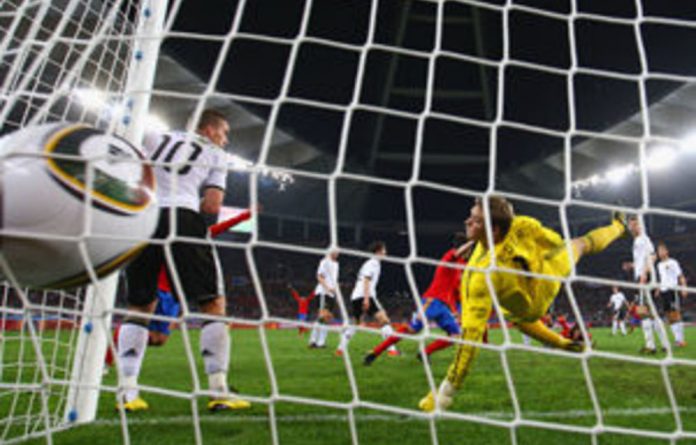 For a tournament with a decent dose of thrilling highlights but no abiding classic encounters, the arrival of The Netherlands and Spain in Sunday’s World Cup decider holds the promise of a proper finale.

Skill and guile are in abundance on both sides and, set against the backdrop of the highest stakes in the sport and in an iconic arena, it promises to close the first African World Cup in the style the locals best appreciate.

Spain’s win over Germany in Wednesday’s second semifinal was by far their best performance of the tournament, first stifling the expected challenge from the Germans by continually keeping and ­circulating the ball.

Then came the probing passes and darting runs, unfortunately not matched by the finishing — mostly off-target shooting from the edge of the penalty area.

But Carles Puyol’s powerful headed winner, near the end of the game, was inevitable and deserved.

Unlike the Dutch semifinal showing, few frailties were evident in a Spanish side more than three weeks — no, rather light years — away from the panicked side that started the World Cup with a defeat by the Swiss in Durban.

It is Spain’s first final and the third for the Dutch, but this final will produce a first-time World Cup winner. That new golden star above the chest emblem on their jerseys is going to be replica nirvana for the fortunate winning shirt manufacturer.

The occasion will also mark the first success for a European country in a World Cup hosted outside their continent. At the last winter World Cup, 32 years ago, the Dutch were denied a last-minute winner by the width of the goalpost.

Most importantly, though, Sunday will crown the success of a side that has encouraged and embraced the talent and technical ability of a few outstanding individuals and built a team around them.

In the case of Spain it is the midfield duo of Andres Iniesta and Xavi, complemented by David Villa in attack. For the Dutch it is Wesley Sneijder, Arjen Robben and Robin van Persie.

All have the ability to make a decisive impact on Sunday’s final. There has not been a previous World Cup final with such a distinctive array of individual talent.

Spain are a side long over the burden of past inconsistencies, with a foundation built on success at junior level and a group of players who are proven winners, season after season, with their clubs.

With success at the last European Championship, co-hosted by Austria and Switzerland, to whet their appetite, Spain will start Sunday’s final as favourites.

As vanquished German coach Joachim Low said in Durban on Wednesday night: “I am sure the Spanish can win any game because they are dominant and it’s hard to contain their attack. They are the masters of the game. You can see it in every pass. They can hardly be beaten. They are extremely calm and convincing.”

Spain must be starved of the ball and kept on their heels if they are to be denied a second major title in two years.
For the Dutch to stand any chance, they will need the ball for quick build-ups and to exploit every blade of grass, with Robben wide on the right and Dirk Kuyt hugging the left touchline.

Van Persie has looked uncomfortable as a central striker but dangerous nevertheless. But Sneijder is the player with the most kudos, revelling in his role behind Van Persie and protected by the midfield ninjas that are Nigel de Jong and the astute Mark van Bommel.

However if, as expected, Spain have most of the possession, it is an untried Dutch defence that will come under an intensive microscope.

There were times in the semifinal against Uruguay, in Cape Town on Tuesday, when the Dutch lost their grip on the game against a plucky opponent with few of the qualities Spain will present.

But coach Bert van Marwijk moved quickly to change that, not scared to make the half-time switch that wrestled the game back in favour of his team.

For a nation of fewer than 20-million, the Dutch continually produce prodigious talent and have become a mass exporter of quality footballers to go with the tulips and cheese they sell to the world.

But Spain have been recent masters of junior development, reflected in all the success they have enjoyed at Fifa’s youth championships in the past decade.

The reward awaits one of these progressive footballing nations on Sunday night.