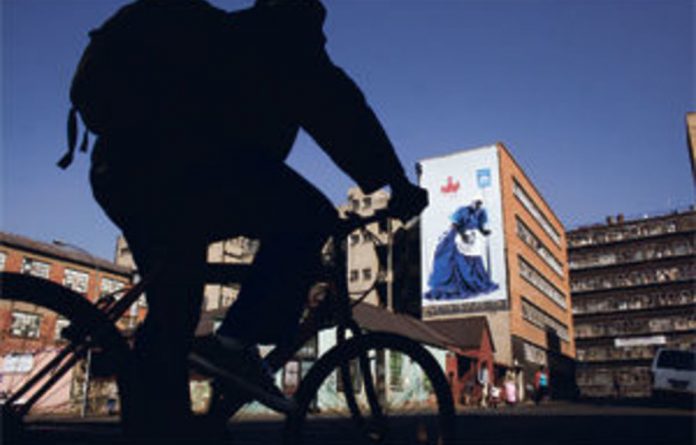 On June 27 we caught the night train from Park Station to Soccer City to watch Argentina play Mexico. The carriages were hot and wonderfully loud. Outside it was rather cool and quiet, although only two of us were brave enough to stick our heads through the windows and look at the full moon as it moved across the city, seeming to jump from left to right or suddenly appearing straight ahead. We knew, of course, that it was really us and not the moon that was moving, but it sparked a sense of childish delight. As the train chugged away in the dark, familiar city shapes gradually yielded to the winter sky, until all we could see was the Nike billboard in Johannesburg’s CBD flashing in the distance.

A new city art project is transforming the Joâ??burg skyline. Artist Mary Sibande is the first to have her work used this way.

I’ve always loved the way Jo’burg’s skyline shifts, depending on where you are. Ponte and the Hillbrow tower look completely different if viewed from a balcony in Kensington or down the length of Hay Road in Turffontein. It’s a city that is always changing, demanding a constant revision of perspective.

Nearly 10 years ago Jo’burg launched the Johannesburg Art City Project, which aimed “to transform the centre of Johannesburg into the world’s largest outdoor art gallery”. The concept had been brought to the city by a Wits law student named Saul Symanowitz and was intended to promote South African artists and showcase the city’s urban-renewal projects through a series of massive public art installations, including a number of art “billboards” draped across inner-city buildings. The art indeed went up — mostly thanks to large private-sector support from Cell C — but the city seemed to resist the unwieldy makeover that resulted.

“We thought that we would transform Jo’burg,” says Lesley Perkes of Artists at Work, which managed many of the installations, “[and] that everyone would notice it was wearing a new dress. But the works didn’t speak to one another in terms of design. We learned some lessons. We’d proved we could do huge, logistic-scale public art. But we hadn’t really interacted with the walls of the buildings; curated the city as a gallery.”

Eight years later Perkes is getting the chance to dress the city again — this time with a single artist, Mary Sibande, whose artworks from her exhibition Long Live the Dead Queen will be displayed as 19 giant building-wraps in the inner city over the next three months, sponsored by the National Lottery Distribution Trust Fund. The first two billboards have been installed on Pritchard Street, with the third going up (well, down, really) on the side of August House, just off End Street, last week. When we look up at Jo’burg’s buildings we won’t be bombarded only by messages on corporate billboards — now a domestic worker will be staring down at us.

“When I started looking at public art, it was about reclaiming fascist space,” says Perkes. “Instead of knocking things down and building them up again, we wanted to make the spaces beautiful — the impossible spaces between the cities and the townships and in the inner city. But we didn’t understand the political nature of what we were doing, how contested these spaces were,” Perkes says.

Her initial attempts to get funding for public art interventions saw “lots of support but no money. In the end it became a fascination with the processes. And now we’ve learned from the branders. Johannesburg Art City will work like branding — but there is none.”

It’s a triumphant moment. The absence of a single logo or payoff line on any of the current works is, perhaps, why it took Perkes eight years to get the right funding, and what will distinguish the reinvented Art City from its predecessors, allowing Sibande’s striking series of work to hold its own against the combined weight of Vodacom, Absa, Nike and Telkom et al. It’s Sophie the domestic worker, taking on the corporate giants.

“I like the fact that there are no names on the billboards; not even my name,” says Sibande. “A lot of people are going to ask: ‘What is this? Why is this in the city? Who is that woman, and why is she wearing blue?’ And part of the experience is that no one is going to answer those questions. In the city no one will talk to you.”

Sibande lives in August House (where the third billboard is situated) and believes that the project is important “because people in the city don’t go to galleries. Most of the galleries are in the northern suburbs. But if we take the gallery and put it in front of them …”

It’s a challenge in a city where, as my photographer says, nobody ever looks up.

When we go back to visit Sibande’s billboard on Moseley Road the day after it’s installed, the people on the street openly stare at us as they pass by. We are outsiders in our black car with loud music and locked doors. Maybe they think we’re tourists. When we stop in front of August House we park and sit, looking up at the beautiful dark Sophie (who is not making eye contact with anyone) in her wonderful dress. No one wonders what we are looking at or follows the direction of our gaze. It becomes a game: we look at Sophie, we look at the people not looking at Sophie, looking at us. Eventually a man in khaki overalls and a woollen hat follows our eyes up, up, up to the side of the building. He stops, with an awkward stumble mid-stride, and at last he sees. He is the only one. And then he carries on walking.