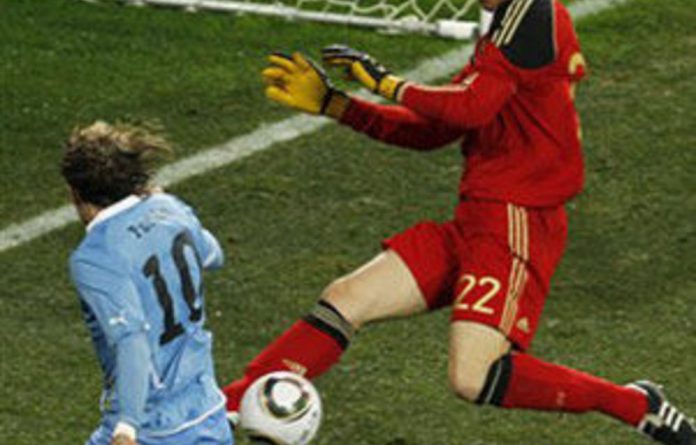 Germany rounded off an impressive World Cup with a thrilling 3-2 win over a stubborn Uruguay on Saturday in a play-off for third place.

Midfielder Sami Khedira headed in a corner after a goalmouth scramble eight minutes from time to give the three-times champions a well-deserved victory and deny Uruguay their best World Cup finish since lifting the trophy 60 years ago.

It was the second tournament in a row Germany finished third after they won the play-off game as hosts at the last finals.

Germany went ahead in the 19th minute with Thomas Mueller’s fifth goal of the tournament but Uruguay hit back nine minutes later through Edinson Cavani.

The Uruguayans briefly snatched the lead through striker Diego Forlan, with his fifth goal of the tournament, in the 51st minute but fullback Marcell Jansen equalised five minutes later.

Khedira then popped up with the winner but Uruguay went agonisingly close with the last kick of the game when Forlan’s curling freekick from 20 metres rattled the crossbar.

Mueller and Forlan joined Dutch midfielder Wesley Sneijder and Spain striker David Villa at the top of the scoring charts.

Four changes
The Germans made four changes to the side that lost to Spain in the semifinals and showed touches of the slick style that saw them trounce England and Argentina in the knockout stages.

The Germans went ahead when Uruguay keeper Fernando Muslera pushed Bastian Schweinsteiger’s swerving long-range shot into the path of the onrushing Mueller, who slotted calmly into the corner to put himself into the joint lead for the Golden Boot.

Uruguay exposed the German defence in the 28th minute when Diego Perez dispossessed Schweinsteiger on the halfway line and played in Luis Suarez, who threaded the ball to Cavani to level the score with a delightful finish into the far corner.

Uruguay were in attacking mood straight after the break and were denied the lead two minutes later by a fabulous double save by from Hans-Joerg Butt from Cavani then Suarez.

They did go ahead though six minutes after the break with a fantastic volley on the turn from the edge of the area by Forlan, who drove Egidio Arevalo’s cross into the far corner.

But the Germans had not given up and levelled the score in the 56th when Jansen got above two defenders and the keeper to head home Jerome Boateng’s perfect cross to the far post.

They then withstood a stream of Uruguayan attacks and carved out the winner in the 82nd minute through Khedira before holding their collective breath when Forlan hit the bar. – Reuters