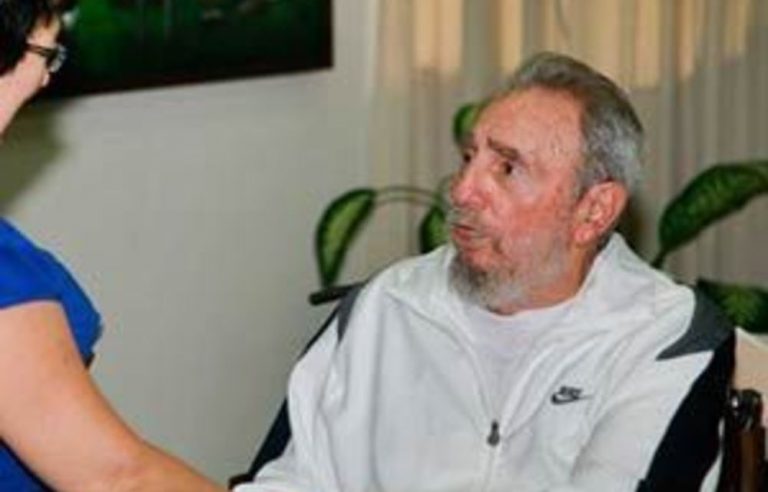 Cuban revolutionary leader Fidel Castro made his first known public appearance since falling ill four years ago in a visit this week to a Havana scientific facility, a blog and a Cuban government website reported on Saturday.

Photographs posted on state-run www.cubadebate.cu taken by his son Alex showed a smiling, healthy-looking Castro (83) talking with directors of the National Centre of Scientific Investigations.

News of the visit first came out on a pro-government blog, where photographs taken with a cellphone were posted of Castro greeting admirers as he left the centre.

The blogger, Rosa C Baez, wrote that Castro was spotted making a “surprise visit” to the centre on Wednesday and stopped to greet and “throw kisses” to the group that waited for a chance to see him.

“He is thin, but looked good and, according to our director, is very good mentally,” said Baez, whose blog appears on a website entitled Bloggers and Correspondents of the Revolution.

In the photos, the white-bearded Castro wore an athletic jacket, as he has in virtually all photographs published since he went into seclusion.

Four yeas of seclusion
Castro has been seen only in occasional photographs and videos since he underwent emergency intestinal surgery in July 2006 and ceded power provisionally to his younger brother, Raul Castro.

His first public appearance in years comes as Cuba is preparing to release 52 political prisoners, all jailed in a crackdown on the opposition in 2003 while Castro was still in power.

The visit to the scientific centre celebrated the 45th anniversary of the centre’s creation in July 1965.

Last year, Venezuelan President and close ally Hugo Chávez said Castro had been going for walks near his Havana residence, but they were never confirmed by the government and there were no known photos of him out and about.

Castro, after leading the 1959 revolution that toppled a US-backed dictator, ruled Cuba for 49 years and, with his many long, televised speeches and numerous public appearances, dominated Cuban life.

He resigned the presidency in February 2008 and Raul Castro (79) officially took over as president in a vote by the National Assembly.

Even though he has stayed out of sight, he has maintained a public presence through opinion columns written for Cuba’s state-run media, and still plays a role behind the scenes.

For more than a year, his columns have dwelt almost exclusively with international topics. He has said he was told his columns on domestic issues were interfering with the government’s work.

In the past few weeks, Castro has predicted in his columns that the world is on the verge of nuclear war, to be sparked by conflict between the United States and Iran over international sanctions against Iran’s nuclear activities. – Reuters