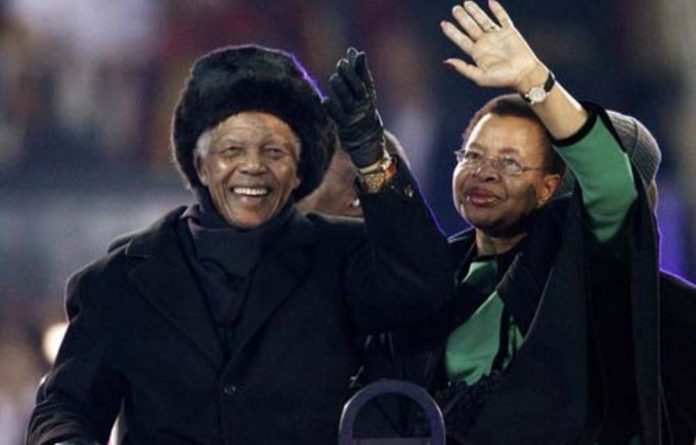 Nelson Mandela briefly visited the stadium just before the World Cup final between Spain and The Netherlands on Sunday, capping South Africa’s joy over a successful tournament.

The much loved former leader, 91, who is in frail health, briefly toured the pitch in a golf cart surrounded by bodyguards before the match.

He was greeted ecstatically by the crowd in the huge flagship Soccer City stadium who chanted his clan name Madiba and blew vuvuzela trumpets.

Mandela was unable to attend the opening ceremony on June 11 because of the death of his great grand-daughter in a car accident the night before.

But his grandson Mandla said earlier he wanted to greet the fans after a tournament that has boosted national pride and defied predictions of chaos and disaster.

Throughout the day ahead of the evening match, as excitement built, hordes of orange and red clad Dutch and Spanish fans tried to out-do each other with songs and the most outlandish outfits as locals gleefully joined the party, painting their faces and wearing the flag of their favourites.

See our gallery of images from the World Cup closing ceremony

Spotlights, fireworks and lasers lit up the night sky, and giant puppet elephants paraded around the pitch.

The best World Cup games often come in the semifinals but Spain and The Netherlands are seen as the pick of the bunch here technically, tactically and temperamentally.

It is a final of firsts in addition to the location. Neither side has won the World Cup despite their undoubted quality, and Europe will win its first trophy on another continent.

Huge crowds will watch the match at open air venues in their home countries with up to 100 000 expected in central Amsterdam, which is bedecked in orange flags and banners.

The final has raised spirits in two countries that badly needed cheering up. The Dutch went through polarising elections in June that failed to produce a clear winner and Spain is torn by bitter political infighting over how to address Europe’s highest unemployment and crippling debt.

The Spanish and the Dutch perfectly illustrate this World Cup’s biggest lesson — that the teams who play as units are superior to those that revolved around fallen pre-tournament favourites like Cristiano Ronaldo and Wayne Rooney.

The successful tournament is triumph for South Africa which has confounded years of foreign reports that it would be a failure, ruined by violent crime, chaos and unfinished stadiums.

President Jacob Zuma thanked the nation, saying they were stars and champions for hosting a successful tournament and “opening up your country and your hearts to the world”.

Despite being the first host nation eliminated at the group stage, locals have remained enthusiastic spectators, helping this World Cup to be the third best attended ever, with three million seats sold, behind the United States in 1994 and Germany in 2006.

Chief local organiser Danny Jordaan said the tournament had brought the races together and enabled South Africans to walk tall after being told for years they were inferior. “The nation has crossed a huge psychological barrier,” he told reporters.

Slow starters
European champions Spain are the popular choice of many South Africans because of their stylish game, and easily topped an online international press poll.

But The Netherlands will be tough to beat, with a powerful trio of Dirk Kuyt, Wesley Sneijder and Arjen Robben to combat Xavi and Andres Iniesta leading Spain’s masterful midfield.

Spain have tormented opponents with their talent for holding the ball and precise passing even under pressure, but have lacked killer instinct in front of the net with only seven goals from six matches.

The Dutch have been more prolific with 12 goals, but have also seemed to lack the killer instinct at crucial moments.

Spain’s fans will be led at the final by Queen Sofia while the Dutch are backed by outgoing Prime Minister Jan Peter Balkenende, among an array of VIPs.

Analysts say the tournament has rebranded South Africa and the whole continent and new business and capital is already flowing in on the back of the tournament. – Reuters