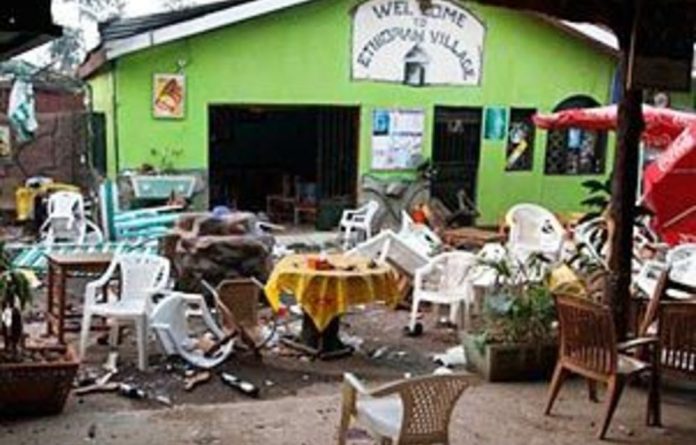 Ugandan police have found an unexploded suicide vest and made a number of arrests after coordinated bomb blasts ripped through two bars and killed at least 76 fans watching the Soccer World Cup final on Sunday.

Somali al-Shabaab Islamists linked to al-Qaeda said on Monday they had carried out the attacks, but an official from the militant group said on Tuesday there had been no suicide bombers involved.

The vest was found on Monday in Makindye, a suburb of Kampala, and was consistent with evidence found at the other blast sites in the capital, Inspector General of Police Kale Kayihura told reporters.

Ugandan police said the vest was designed so it could be planted, rather than worn, and be used as an improvised bomb.

“Rage blessed those who carried the attack and expected a long life for them. That shows there was no suicide bomb. These were planted,” a man who identified himself as Yonis, assistant to al-Shabaab spokesperson Sheikh Ali Mohamud Rage, told Reuters by telephone.

Coordinated attacks are a hallmark of al-Qaeda and groups linked to Osama bin Laden’s militant network. If confirmed to be the work of al-Shabaab, they would be the first time the militants have taken their push for power internationally.

Analysts have questioned whether they might have been helped or funded by elements in Uganda, or foreign militants within al-Shabaab itself.

“Somalis or foreigners, the effect is nonetheless the same. It is the foreign elements that now dominate the al-Shabaab project,” Abdi Samatar, a Somalia expert at the University of Minnesota, said.

Kayihura gave no further details on how many suspects had been detained or where they were from. He also revised up the death toll to 76 from 74.

‘No peace to keep’
The al-Shabaab militants have threatened more attacks unless Uganda and Burundi withdraw their peacekeepers from the African Union peacekeeping force in Somalia (Amisom). They control of large areas the south and centre of the anarchic country.

But regional bloc Igad said it would not cower in the face of threats and would continue to support the Western-backed government in Somalia.

“We shall continue with our plans to increase peacekeepers in Somalia to more than 8 000 and we hope to have the extra troops in the country by the second week of August,” executive secretary Mahboud Maalim told journalists in the Kenyan capital, Nairobi.

Uganda’s opposition Forum for Democratic Change (FDC) party urged President Yoweri Museveni to pull his peacekeepers out and said it planned a withdrawal if it won elections in 2011.

“There is no peace to keep in Somalia and Uganda has no strategic interest there. We’re just sacrificing our children for nothing,” FDC spokesperson Wafula Oguttu told Reuters.

Analysts say any sustained bombing campaign would damage Uganda’s investment climate, but a one-off attack was unlikely to deter major companies such as British hydrocarbons explorer Tullow Oil from investing.

An American was among the dead, and the US State Department said it had three FBI agents on the ground collecting evidence. An additional team was on standby to deploy.

Opolot said there was no suggestion an African Union summit to be hosted by Uganda this month would be cancelled following the bombings. — Reuters