Between a frock and a hard place 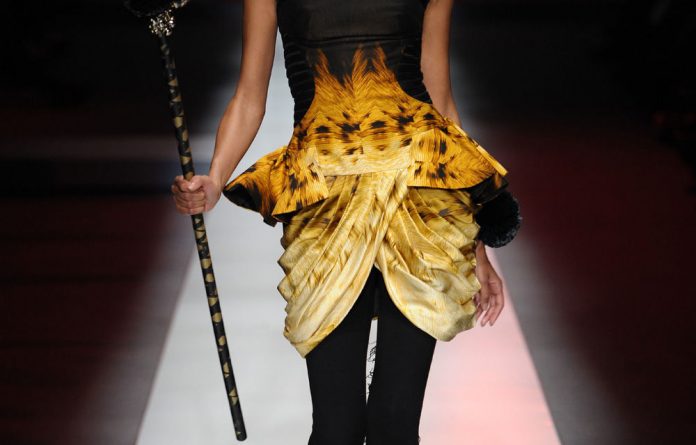 The annual Africa Fashion Week (AFW), a showcase of the continent’s finest designers, was overshadowed by the World Cup quarterfinal match between Ghana and Uruguay on July 2.

Sadly for the organisers, football trumped fashion and the turnout for many shows was disappointing. Acclaimed South African fashion brand Stoned Cherrie even cancelled its show scheduled for 7pm on the day of the Ghana vs Uruguay match. Designer Nkhensani Nkosi and Africa Fashion International (AFI) mutually agreed to pull the show from the programme in support of Africa’s Black Stars.

The reshuffling of the show schedule, only days before the event was set to begin, shows that the timing of the event was a tad unfortunate. The point of running AFW parallel to the World Cup, I presume, was to attract an international audience with an interest in African fashion. What the organisers failed to realise is that, for most fans visiting South Africa, football is king. Even local fashionistas were absent from shows, preferring instead to savour the last few matches of this memorable tournament.

And the fact that almost every show started (un)fashionably late didn’t help those trying to keep abreast of happenings on both the pitch and the runway.

Timing aside, AFI must be commended for selecting an exceptional calibre of designers from South Africa and abroad. Big names were present, including Malian-born, Paris-based Xuly Bët and Nigerian designer Deola Sagoe, who showed alongside the likes of Abigail Betz, Marianne Fassler and David Tlale, the local heavyweights.

Although some designers presented collections with a distinctly African aesthetic, others chose to embrace a more Eurocentric vision. Overall, the balance worked well and proved successful in catering to the varying tastes of the audience.

Such an event raises the often-asked questions about what it means to be an African fashion designer. What should African fashion look like? What constitutes a contemporary African perspective? Needless to say, many designers struggled to address the need to express their African heritage and culture in a way that the global citizen would find appealing.

A handful did get it right. Nigerian-born, United Kingdom-based Bunmi Koko’s collection, “Matriarchy”, celebrated female empowerment in Africa. Koko’s range was inspired by a sacred Nigerian cult, the Ekpe, a women-only secret society dating back to the time of Queen Victoria. Models wielding feather-encrusted staffs paraded down the ramp in striking printed ensembles. Koko’s reference to Africa was subtle but ever so chic.

Fassler drew inspiration from the World Cup for her spring-summer collection. Known for her use of leopard print and mix-‘n-match fabrics, Fassler created a range for the urban African nomad with quirky touches of South African culture. Her vuvuzela-inspired sleeves featuring the colours of the South African flag showed Fassler’s ability to tap into the zeitgeist without descending to kitsch or curio status.

Nigerian designer Ituen Basi’s collection, on the contrary, was the antithesis of contemporary African. The range was an overdose of Vlisco printed fabrics (which come from Holland but are widely considered African) in bursts of tropical colours. South African designer Thula Sindi experienced a similar predicament with his range that featured one too many animal prints.

Falling between these polar opposites were designers such as Paris-based Sakina Msa and Ghanaian Mimi Plange for Boudouir D’Huitres, who presented collections with a particularly European edge, paying meticulous attention to fit and detail.

A new initiative by AFW this year was the launch of the AFI Boutique, a pop-up store in the Sandton Convention Centre for the duration of the World Cup. Designers showing at the event could sell their wares directly to the public from stalls in the exhibition space. It was a great idea, but the problem was that, before the event, nobody knew of the boutique’s existence.

Compounding the dismal foot traffic, the lack of credit-card facilities severely affected sales — customers were expected to pay cash for designer goods retailing for thousands of rands. Once the boutique closes, international designers will no longer have a local retail point where customers can access their goods — which makes their plans to enter the South African market difficult.

There is talk of an online version of the boutique to be launched within the next few months but it is doubtful whether this will make much difference to local customers who prefer the traditional bricks-and-mortar form of retail therapy.

Mallis emphasised the fact that fashion shows are a means for designers to make their clothes visible to the market but they do not guarantee financial success. What designers need to focus on is the retail aspect of their businesses by developing a market for their products.

Mallis suggested that hosting a single consolidated fashion week instead of smaller provincial events might help to put South Africa on the international fashion calendar.

The event, hosted by AFI, sets out to promote African brands in the marketplace by bringing together leading designers on the continent.