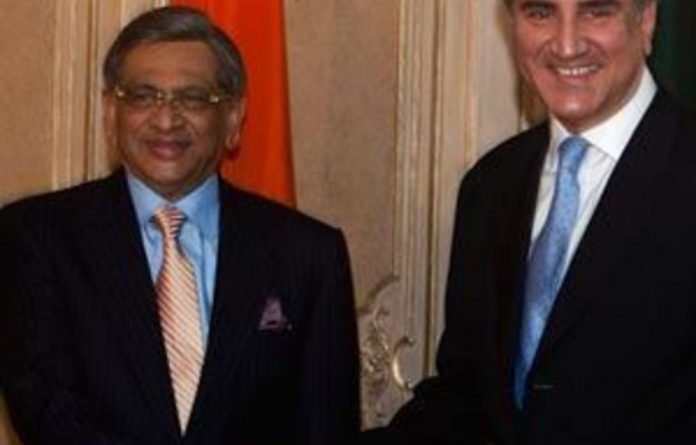 Pakistan said on Friday that India’s “selective” approach to issues has led to what analysts say is a stalemate in talks aimed to build trust shattered by the 2008 Mumbai attacks.

Pakistan Foreign Minister Shah Mehmood Qureshi and his Indian counterpart, SM Krishna, met in Islamabad on Thursday and agreed on more talks but failed to announce any concrete measures that might soothe tensions between the nuclear-armed neighbours.

Then, at a joint news conference immediately after the talks, the two openly sparred, underscoring the air of mistrust between the rivals who have fought three wars since independence from Britain in 1947.

“I could see from yesterday’s [Thursday’s] talks that they want to be selective. When they say all issues are on the table then they cannot, they should not, be selective,” Qureshi told reporters after attending a ceremony for new diplomats in Islamabad.

“Progress in talks can only be possible if we move forward on all issues in tandem.”

But Krishna played down the differences, possibly in keeping with an India trying to move away from a decades-old obsession with Pakistan, seduced more by its growing role in the global economy and concerns with other security issues like China.

“Well I am not going to score debating points over Foreign Minister Qureshi,” Krishna said after returning from Islamabad.

“I would like to concentrate on the serious issues, and the fact of the matter is that we did discuss many issues that are of great concern to both of us, both countries, and we think we have made some headway.”

Security remains India’s top concern after the attack on Mumbai by Pakistani militants, which killed 166 people. After Thursday’s talks, Krishna repeated New Delhi’s call for Islamabad to speed up efforts to bring the perpetrators to justice.

India has linked the relaunching of peace talks between the two South Asian rivals with Pakistan’s action against the perpetrators of the attack.

But Qureshi warned against India’s attitude.

“If we give heed to those issues which they consider important and those issues in which Pakistan is interested are neglected then things cannot move forward,” he said.

Keeping alive dialogue
Pakistan wants discussions on other issues, including its core dispute with India over the Himalayan region of Kashmir, the cause of two of their three wars. Kashmir is divided between the two countries.

On Friday, India reimposed a curfew in parts of Kashmir where India is fighting a two-decade-old separatist insurgency. Huge anti-India protests have swept the region over the past month.

While the latest round of talks may not have done much to clear the air of mistrust, the two countries are likely to keep alive dialogue because India would want to boost the credibility of Pakistan’s civilian government in the face of military hawks.

Also, both sides have been under pressure from the United States to reduce tensions because their rivalry is often played out in Afghanistan and complicates efforts to bring peace there.

“I don’t see this as a temporary setback because here we are looking at a lengthy, complex process,” said Siddharth Varadarajan, strategic affairs editor of the Hindu newspaper.

“Part of such a process will mean having a more dense calendar of meetings, and they will proceed on the deliverables like cross-border trade and Sir Creek,” he said, referring to a maritime border dispute in the area of the Sir Creek estuary.

Indian officials said the two countries could meet in the coming months to try to “enlarge the constituency of convergence” such as in trade and culture. — Reuters