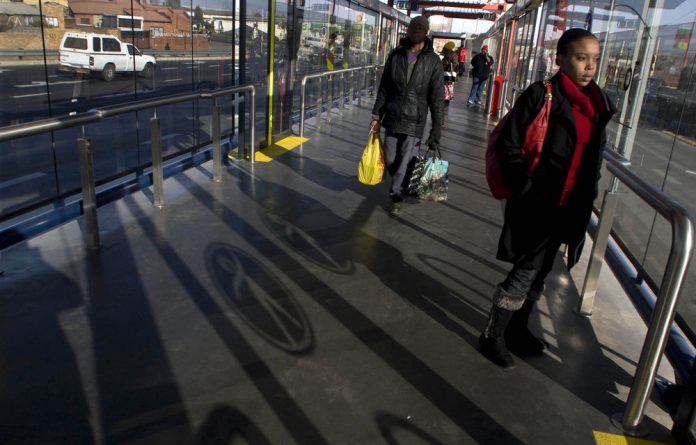 Upgrades in the public transport system have been touted as a key legacy of the Fifa World Cup but a close look shows that the new transport infrastructure is a mixed bag.

Travellers interviewed by the Mail & Guardian said that improvements in the bus rapid transit (BRT) system were welcome but not far-reaching enough and too expensive for most users.

Rail services were upgraded temporarily for the World Cup, but only in urban areas. The R24,2-billion Gautrain is an impressive development, but one few can afford.

It is the highway system that will prove to be the most long-lasting legacy. The widening of lanes, resurfacing of major arteries, construction of new flyovers and revamping of interchanges has already resulted in the decongestion of major routes. The first phase of the improvements, costing R22-billion, focused on 185km of highway around Johannesburg and Pretoria.

And there may have been perceptual changes.

“More South Africans who usually use cars were exposed to quality public transport such as Rea Vaya and Metrorail than ever before,” said Lisa Seftel, executive director of transport for Gauteng.

About R90-billion was spent on extensive transport infrastructure in anticipation of the World Cup. Phase one of the Rea Vaya BRT cost R2,4-billion, R14,7-billion was pledged for improvements to the Passenger Rail Agency of South Africa (Prasa), and R50-billion will have been invested in the Gauteng Freeway Improvement Project once it is complete.

In 2006 the City of Johannesburg drafted a transport action plan detailing how transport should work during the World Cup.

About 10 000 passengers used the Rea Vaya on match days and more than 45 000 commuters are expected to use it daily after the World Cup, when services will be extended to late at night and more distant destinations.

The Rea Vaya trunk route costs R6, which Seftel says is cheaper than a taxi fare. But feeder routes cost more. Commuter Thembi Tshabalala said that connecting buses were too infrequent and too expensive.

“The train is cheaper than Rea Vaya,” said security guard Thabo Tsotetsi, who catches the Metrorail from Vereeniging. Many commuters cannot use the Rea Vaya system because it does not extend beyond Soweto and stops at 6pm.

“In my area there is no Rea Vaya,” Tsotetsi pointed out.

Metrorail, which, with Shosholoza Meyl, falls under Prasa, is used by 2,2-million commuters daily. According to Prasa’s Nana Zenani Metrorail usage has passed the 100 000 a day mark in Gauteng — usage went up during the World Cup.

Improvements to key rail infrastructure under Prasa included the opening of the R70-million upgraded Nasrec station and improved train services. Prasa has set aside about R25-billion in the next three years for station improvements.

But long-distance travel remains problematic. British student Simon Goodall complained that during a Shosholoza Meyl journey from Bloemfontein “conditions were cramped, staff [members] were rude and the journey took 10 hours”.

The transport action plan did acknowledge that grants from the Public Transport Infrastructure Fund for commuter rail could not overhaul the entire system; that would require “massive reinvestment to improve service quality, regularity, security and attractiveness”.

The budget focused only on “immediate improvements to rail station facilities fundamental to the success of the 2010 Fifa World Cup”, including security.

Controversy continues to surround the Gautrain, targeted for more than R25-billion in investment while the national rail system remains neglected. The project has been criticised for its high cost relative to demand.

But the Gautrain’s Bombela Consortium insists that fares will be lower than the cost of using a private car for the same journey.

The transport action plan did not provide for the Gautrain. Planning for it began in 2 000, four years before the World Cup was awarded to South Africa. The train is currently being used by an average of 11 000 people a day. Gautrain’s Barbara Jensen expects the figure to rise to 140 000 a day once the route is complete.

The train is designed to reduce road traffic between Johannesburg and Pretoria by 20% on completion, resulting in 80 000 fewer cars on the road.

The Gautrain may become an expensive inevitability for road users as the installation of intelligent transport systems and open road tolling planned for many Gauteng highways will raise costs for vehicle owners.