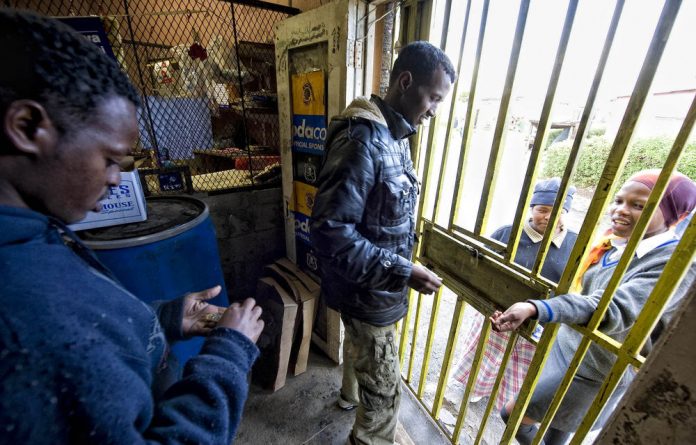 Somali shopkeepers have moved back their stock and reopened their stores in the Du Noon settlement, Cape Town’s xenophobic “hotspot”, where the army and police were sent in last week.

Somali-owned shops in the impoverished area were closed from Monday as foreigners fled in fear of threatened attacks after the end of the World Cup.

By Wednesday evening Somali, Mohamed Ahmed Ali, who works in a shop in Du Noon, was again serving customers, but through a security gate. Locals were friendly to him, he said, and were saying it was good to have him back.

Bram Mhlom, a facilitator contracted by the Western Cape government since 2008 to combat xenophobia in poor communities, also believes calm is slowly returning to some areas.

Mhlom said attacks in areas like Kraaifontein had been sporadic and were mostly carried out by youngsters. “I think now that the youngsters have gone back to school the situation will calm down,” he said.

Mhlom described the police performance during the xenophobic outbreaks he had witnessed this week as poor, alleging that officers had stood by during looting in Wallacedene on Monday, “chatting to other residents”.

“My expectation was that they would at least try to protect the possessions of the Somalis,” he said, adding that he had reported the incident at the local police station.

But civic organisations such as the Social Justice Coalition, the Treatment Action Campaign and Equal Education applauded the SAPS for its swift responses.

Since Tuesday the police had, in general reacted quickly and effectively to violence in Khayelitsha in difficult conditions, they said.

But the organisations condemned the government’s failure to acknowledge the xenophobic nature of recent attacks. On Monday, while attacks were occurring in the Western Cape, concern was raised after President Jacob Zuma stated publicly that he was not certain whether there had been threats of xenophobic violence.

“In our view it appears that senior police and the intelligence services have failed to brief President Zuma and his Cabinet properly,” the organisations said, calling on the government to use the leadership skills it showed during the World Cup to curb violence against foreigners.

Sisulu pledged that all resources would be made available to prevent criminal violence.

Recurring reports of xenophobic crime in poor areas across Cape Town began on Sunday evening. Since then 15 incidents have been reported in Khayelitsha, mostly involving the looting of Somali-owned shops by roving mobs. In most cases the owners of the shops vacated their homes and premises before the attacks.

Some displaced Somalis and Zimbabweans who fled the violence in Wallacedene outside Cape Town and Mbekweni near Paarl have been housed in Wellington and in a camp on its outskirts, said Mhlom.

The settlement was the scene of anti-immigrant violence in 2008, while many residents fled last year after some foreigners were hounded out following the alleged rape of a three-year-old South African girl.

Some foreigners fled for their lives on both occasions and chose not to return. But others have risked staying and have received the backing of community leaders.

Members of the community met all stakeholders — including foreigners, political parties and police — in the community hall in Imizamo Yethu on Wednesday night to try to counter potential xenophobic outbreaks.

But Nogwavu said that most Somali shopkeepers had not opened their shops until late on Monday morning, waiting to see if violence erupted.

The Somalis were eventually persuaded by locals to keep their shops open.

“On the night of the World Cup final I heard two young boys speaking in the street in Hout Bay, saying that after the match was over, the xenophobia would start,” said Nogwavu. “I asked them who would attack foreigners and they said they would. When I asked them who had put them up to it, they ran away.”