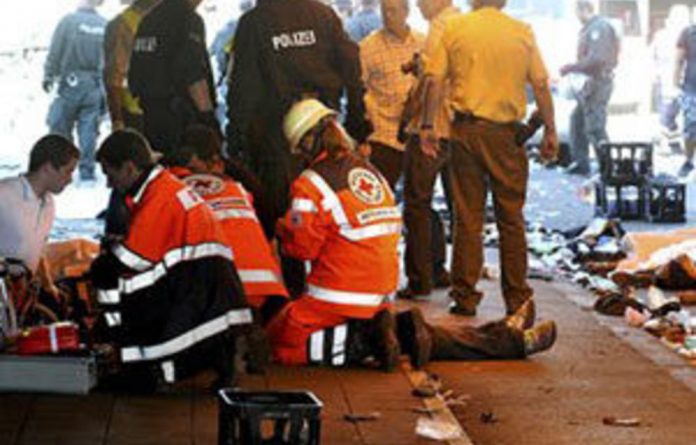 A stampede killed 18 people after mass panic broke out in a tunnel at a “Love Parade” techno music festival in Germany on Saturday.

Overcrowding at the entrance tunnel to a former freight rail station where the event was being held sparked the stampede and then a crush among the mainly young festival-goers, police said.

The festival, which police said drew about 1,4-million people, was not immediately cancelled because authorities feared an abrupt halt could spark a second panic.

Music blared out after the stampede and people danced on, unaware of the unfolding tragedy nearby. Organisers finally called the event off in late evening hours after the deaths.

“There were piles of injured on the ground, some being resuscitated, others dead and covered with sheets,” 18-year-old Love Parade participant Isabel Schloesser told Reuters.

“It was way too full in the afternoon, everybody wanted to get in,” she said after leaving the rubble-strewn entrance where echoes of a throbbing bass beat could still be heard more than three hours after the crush.

Rescue work was initially hampered by the huge crowds attending one of Europe’s biggest electronic music events in fine weather, officials said. People had come from all around Europe to the Love Parade, most in the 18-25 age bracket.

Police in the industrial Ruhr city of Duisburg in western Germany had tried to close the tunnel entrance about a half an hour before the chaos broke out in late afternoon.

“Apparently some tried to enter the area by climbing a fence along a ramp and then fell,” the head of an emergency task force, Wolfgang Rabe, said on ARD television. “It is still a presumption at the moment, but this could have caused a panic.”

Suffering, pain for revellers
North Rhine-Westphalia state interior minister Ralf Jaeger arrived at the scene in the evening and said 5 500 police and emergency workers had been mobilised to organise evacuation and an orderly end to the festival, which left thousands in a state of shock.

German President Christian Wulff expressed sympathy in a statement and Chancellor Angela Merkel sent a message of condolence to the relatives of the victims.

“These young people went to party and instead found death and injury. I am appalled and saddened by so much suffering and pain,” her statement said.

Authorities put the death toll at 18, with at least 80 more injured, many severely.

No further details were immediately available about the dead, which earlier police reports said included nine women and six men. A doctor from the nearby Johanniter hospital told Reuters about 20 to 30 more people were badly injured.

Police earlier tried to resuscitate some with CPR and the kiss of life inside the 200m long tunnel.

In the direct aftermath, ambulances rushed to pick up victims and police set up an emergency first aid station near the entrance, where live images from WDR television showed thousands of revellers streaming out of the festival towards the main train station as rescue helicopters circled overhead.

“The emergency workers had problems getting to the area due to the massive crowds,” a fire department spokesperson from Duisburg said, declining to be named.

The annual event with a backdrop of electronic dance music such as house, trance and techno, flamboyant outfits and energetic dance moves, was first held in Berlin in 1989 as an event to promote peace through music.

Organisers could not immediately be reached for comment. Police said an investigation had already begun. – Reuters