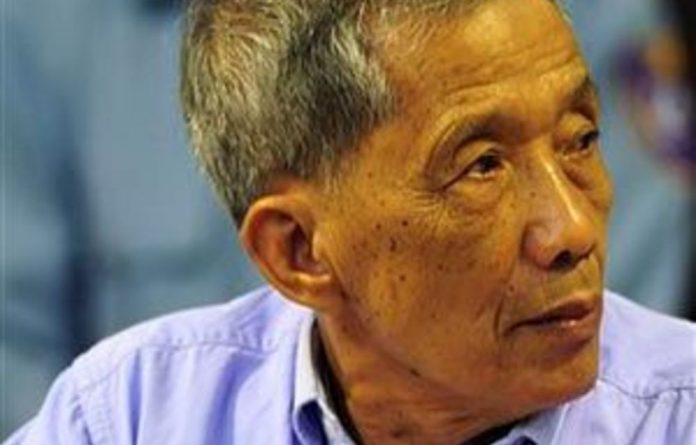 In an historic first, a United Nations-backed court on Monday sentenced a Khmer Rouge prison chief to 30 years in jail for crimes against humanity over mass executions during Cambodia’s “Killing Fields” era.

Kaing Guek Eav, better known as Duch, is the first Khmer Rouge cadre to face justice in an international tribunal over the deaths of up to two million people through starvation, overwork and execution under the 1975 to 1979 regime.

But to the dismay of survivors and relatives of victims, the court took into account the years he had already served since his arrest in 1999, meaning that the 67-year-old could walk free in about 19 years.

“Millions of people were killed, millions of dollars have been spent [on the trial], but the killer could be released,” said a tearful Chum Mey (79), one of only a handful who survived imprisonment and torture at the jail.

Duch apologised during his trial in Phnom Penh for overseeing mass murder of 15 000 men, women and children at Tuol Sleng prison — also known as S-21 — but shocked the court in November by finally asking to be acquitted.

“The role of the accused as the undisputed head of S-21 is confirmed by the accused’s own admission, the testimony of witnesses and civil parties,” head judge Nil Nonn said.

“Every individual detained within S-21 was destined for execution in accordance with the Communist Party of Kampuchea policy to smash all enemies,” he added.

The court also convicted Duch of war crimes although it found there was insufficient evidence to prove he personally committed torture or other inhumane acts, the judge said.

Specially built court
Tuol Sleng was the centre of the Khmer Rouge security apparatus and thousands of inmates were taken from there for execution in a nearby orchard that served as a “Killing Field”.

Crowds of Cambodians, including regime survivors and Buddhist monks, turned up at the specially built court on the outskirts of Phnom Penh, hoping finally to see justice for the Khmer Rouge’s crimes. Many left disappointed.

“We can’t accept a sentence where it is conceivable that he could walk even for one minute in society,” said Theary Seng, founder of the Cambodian Centre for Justice and Reconciliation, whose parents were killed by the Khmer Rouge.

Duch was initially given 35 years but the court reduced the jail sentence after ruling that he had been detained illegally for years by a Cambodian military court before the UN-backed tribunal was established.

Prosecutors, who had asked for a 40-year prison term, hailed the judgement as an historic day for Cambodia, although they said they would consider appealing for a stiffer sentence.

“This is a court case, not a football match, so there are no winners or losers. It’s really a question of whether justice has been applied,” deputy prosecutor Bill Smith told reporters.

The joint trial of four more senior Khmer Rouge leaders charged with genocide is expected to start in 2011.

‘Politically motivated interference’
The court is also investigating whether to open more cases against five other former Khmer Rouge cadres after a dispute between the international and Cambodian co-prosecutors over whether to pursue more suspects.

“Up to two million Cambodians died during the Khmer Rouge’s horrific rule, yet the government is refusing to hold more than five people to account,” said Human Rights Watch’s Sara Colm.

Led by “Brother Number One” Pol Pot, the Khmer Rouge was responsible for one of the worst horrors of the 20th century, wiping out nearly a quarter of Cambodia’s population through starvation, overwork and execution.

The Khmer Rouge was ousted by Vietnamese-backed forces in 1979, but continued to fight a civil war until 1998. Pol Pot died in the same year.

Duch has been detained since 1999, when he was found working as a Christian aid worker in the jungle, and was formally arrested by the tribunal in July 2007. — AFP