‘No survivors’ in Pakistan plane crash 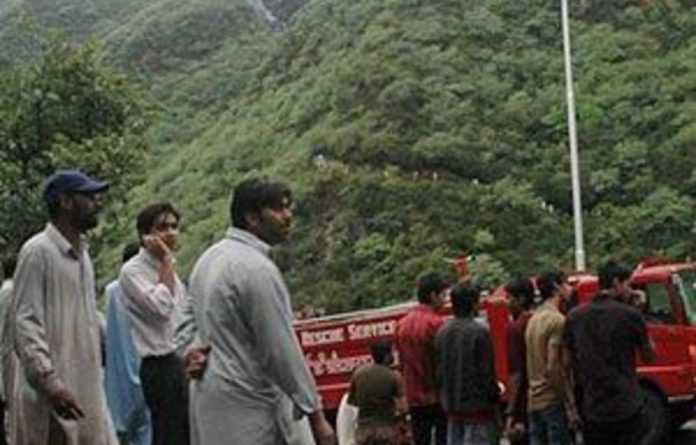 A Pakistani airliner carrying up to 152 people crashed in a ball of flames on Wednesday into densely wooded hills outside Islamabad amid heavy rain and poor visibility, killing everyone on board.

Rescue officials said pieces of charred flesh and body parts were littered around the smouldering wreckage, partially buried on a remote hillside, in the deadliest crash involving a Pakistani passenger jet in 18 years.

Private airline Airblue’s flight 202 from Karachi was coming in to land at Islamabad’s Benazir Bhutto International Airport when witnesses saw it flying at an unusually low altitude and then heard a loud boom.

The plane disintegrated into a gorge between two hills, enveloped in cloud and some distance from the road, severely hampering rescue efforts and limiting visibility for helicopters hovering overhead, said an Agence France-Presse correspondent.

“I saw a big ball of smoke and fire everywhere with big pieces of aircraft rolling down the hill,” said police official Haji Taj Gul.

“The plane was flying very low. Then we heard a loud noise,” said Wajih-ur Rehman, a resident of the exclusive E-7 neighbourhood in the Margalla foothills, home to Western expatriates and some of Pakistan’s elite.

“Nobody survived,” Interior Minister Rehman Malik told Express TV. Bodies were mostly mutilated and in pieces, and would require identification, he said.

Earlier reports had said that a handful of people survived the disaster, but asked whether all those on board the aircraft had died, Malik replied: “Yes, all of them are dead.”

Officials said air traffic control diverted the plane over the Margalla on its final approach into Islamabad, outside the normal route for aircraft flying up from the southern port city of Karachi.

The civil aviation authority said all possible causes would be investigated, including terrorism and bad weather, although officials gave no indication that an attack might have been to blame.

“In the last conversation with the control tower, the pilot had been given landing clearance and the plane was proceeding normally for landing before it crashed into the hills,” said Riaz-ul-Haq, the authority’s deputy director.

“The investigation teams will probe every possible reason behind the crash, ranging from the bad weather to terrorism.”

“All we could see were charred hands or feet. I collected two heads, two legs and two hands in a bag.

“We shouted if anyone was there alive, but heard no voice,” he said.

“The wreckage of the plane is buried under the debris. First machines have to be deployed there to remove debris off the hill and then we can reach to pull out bodies or survivors — if any.”

The government declared a day of national mourning and called off a Cabinet meeting as Prime Minister Yousuf Raza Gilani expressed his grief over the “tragic incident” and offered prayers for the dead.

Anguished families were in tears after hearing of the disaster while waiting to meet their relatives at the Islamabad arrivals terminal.

“We cannot explain our agony, we don’t know if he is alive,” said Bilal Haider, who had come to collect his younger brother, Abbas, returning from a trip to Karachi for a job interview.

Bad weather
Airblue spokesperson Raheel Ahmed said the Airbus 321 took off from Karachi before 3am GMT, and speculated that the bad weather could have been to blame.

“There was no technical fault in the plane when it took off,” he said.

Airbus said the single-aisle plane was a relatively young 10 years old, and the European company offered its full assistance to Pakistani investigators.

No foreigners were believed to be among the dead.

Airblue is one of Pakistan’s most respected airlines. It has been operating only since 2004, using new Airbus A320 and A321 aircraft on domestic routes and international services to Dubai, Sharjah, Abu Dhabi, Muscat and Manchester.

The most recent fatal commercial crash was a Pakistan International Airlines Fokker F27 that came down in July 2006, killing 45 people on take-off from the central city of Multan, bound for Lahore.

The deadliest civilian plane crash involving a Pakistani jet was a PIA Airbus A300 that crashed into a cloud-covered hillside on its approach to the Nepalese capital Kathmandu, killing 167 people in September 1992. — AFP