‘The teeth that saved the world’ 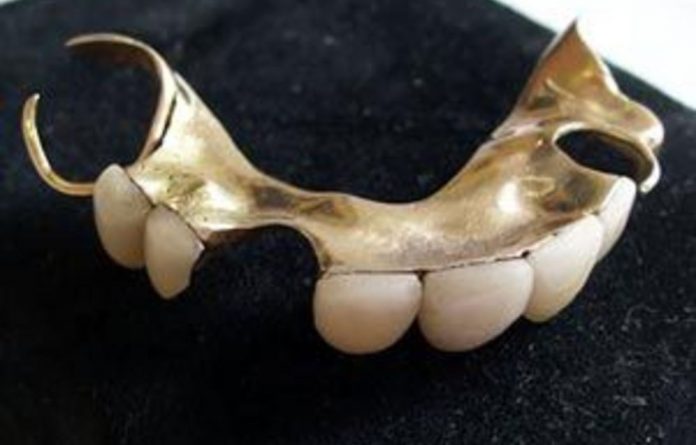 A set of dentures made for Britain’s war-time prime minister, Winston Churchill, went under the hammer on Thursday as auctioneers expected to fetch up to £5 000 for “the teeth that saved the world”.

The false teeth were specially designed to preserve Churchill’s natural lisp, which can still be heard on the morale-boosting radio broadcasts he made to the nation during World War II.

Churchill also used them to vent his frustration when the 1939 to 1945 conflict was not going well by dramatically flicking them out of his mouth, according to Nigel Cudlipp, whose father made the dentures and who is now selling them.

“My father recounted many stories of Churchill putting his thumb behind the front of the teeth and just flicking them,” Cudlipp told BBC radio.

“My father used to say he could tell how well the war effort was going by how far they went across the room and whether they hit the opposite wall.

“Churchill was not a man who was renowned for his patience.”

Melted down
It is thought that only four sets of the teeth were made. One is thought to have gone to the grave with him, another is in a London museum labelled “the teeth that saved the world”, and a third was melted down.

The dentures are going on sale at auctioneers Keys in Aylsham, Norfolk, eastern UK, who have issued a guide price of between £4 000 and £5 000.

Meanwhile, it was announced on Thursday that a huge archive of Churchill’s personal papers is to be made available on the internet for the first time within two years.

This includes about a million pages of material such as annotated drafts of his most famous speeches, school reports and even information about his cat, dogs and pet budgerigar Toby.

“Churchill was someone who lived by his pen so this is an incredibly rich written archive and it must be one of the largest personal archives of its kind in the country,” Allen Packwood, director of the Churchill Archives Centre in Cambridge, said.